I own an XBOX 360, but only play a handful of games. Most games I’ve tried these last years are so annoying in their UX/gameplay, that despite amazing graphics they are a chore to play. Since I don’t like chores I refuse, no matter what reviews, sales or friends say. That is, except for two: and one of them is Gears of War 2.

Oddly enough, I don’t play the core game – I gave up on the single player campaign halfway through (I was bored, which happens to me often in video games). However I do frequently play a wonderful mode of the game called Horde. 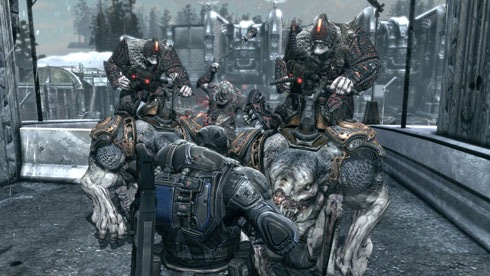 Horde puts you on the same team with friends, and you must work together to fight off wave after wave of bad guys. The teamwork aspect is one of my favorite things (I enjoy deathmatch type games, but I’d rather work with my friends, rather than kill them), as tactics and communication are a big part of the game (which led me to write Management lessons from Gears of War).

I don’t know anyone at Epic (which has a refreshingly simple website), and have no evidence anyone there follows me on RSS. But I hope the wonders of the web might help this little wish list on it’s way towards someone who does.

And in my magic fantasy land those Epic folks don’t get tons of ridiculous wish lists from throngs of fans, and are just sitting around today with no actual work to do waiting for a thoughtful wishlist like mine to arrive.

I’m happy to have interesting kinds of difficulty in a game. But if something is frustrating, and goes against the gameplay model as designed, it’s a glitch, or a bug, or a defect. It’s entirely uninteresting to fight with a game’s own design to play it (which is a frequent occurrence). In real life, when I lose at chess, it’s my fault as the user experience is simple and predictable. But if I try to move my knight, and it crumbles in my hand, or explodes, or doesn’t fit in the squares the rules say are available, I blame the game.

8 Responses to “Gears of War 3: My wishlist for Horde”