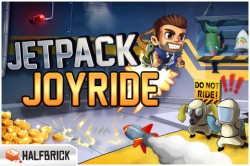 At Failcon 2012 Luke Muscat, the designer of the game Jetpack Joyride, talked about learning from failure. His thoughts explain why the game is so fun even if you always lose. The event organizers wrote a summary of his talk, and it calls out three recommendations that apply to almost anything. The Failcon organizers offer that:

Jetpack Joyride is designed to make the player fail. Over. And Over. And Over.  In fact, it relies on the user not only failing but enjoying it so much that they stick around and share it with friends.  With millions of downloads, clearly it’s working.

This is the opposite of how we tend to think about success and failure. The design of the game embraces failing in three ways, described in the blog post:

Reward Failure:  In Jetpack Joyride, with your ultimate death comes an immediate reward screen recognizing your progress, any mission goals you accomplished, and offering you a slot machine chance for any coin you picked up.  This can be pretty easily practiced with yourself and employees, too.  When encountering a failure (either personal or amongst employees), focus less on the problem that happened and more on what risks were taken, what was learned, and how this is going to improve the process down the road.  Keep yourself and the team feeling engaged with the organization, and show that each failure does contribute to the final product.  Make it very clear that taking well-informed, relevant risks is a good thing.

Leaders and designers should be thinking at least one step ahead of people. When failure happens, instead of silence or inaction there should be a response that’s thoughtful.

Always Have A Next Step: Immediately after exploding, Joyride shows you what your current missions are, to remind you that there is still more to get done.  This is by far the most important take-away for business leaders.  The quickest way to recover from a personal failure is to know what the next step is.  Before taking a big risk, set up a contingency plan: know exactly what things might help in a recovery, and have a short and easy to-do list on the side.  That way, when failure rears its ugly head, you can smile and nod and turn your attentions immediately to the next step, without having to worry about getting stuck in a rut.

It’s natural after failure for people to be gun shy and to resist trying again. Someone has to reduce the tendency to blame others or dwell too long on what is in the past.

Reduce the Barrier To Retry:  Joyride is a quick game with a one-tap ability to replay after failing.  Make failing that easy in your organization.  Use the Next Steps tips to always have a way for people to start again.  More important, make sure no one is dwelling on the failure.  The worst thing you can do is hold it against someone, having a three-strikes rule or anything like that.  This will make each re-entry more frightening.  Discuss what happened promptly, incorporate the lessons, and then move on to something new.

Read the full post here. Also take a look at Failcon 2012: an event about learning from failure.

One Response to “Lessons on Failure From the Jetpack Joyride game”

Leave a Reply to Kav Latiolais