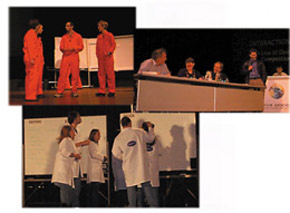 This is an experiment in design education.The idea is to explode the process of design by forcing insane time constraints, and asking teams of designers to work together in front of a live audience. From what we’ve seen, it forces the discussion of design process, teamwork, and organization, and asks important questions about how designers do what they do. Below are summaries of previous events, and information about how to organize your own Interactionary.

Supporting material:
Interactionary FAQ: What is this? How can you mix sports and interaction design training? Why is it worth doing?

One Response to “Interactionary and design sports”