My first book was published almost a year ago – While no one can predict book sales, that hasn’t stopped people, especially writers, from trying.

Below you’ll find a year’s worth of amazon.com sales data for The art of project management (provided by rankforest.com) with notes on my activities (This starts 4 weeks after the book was in stores because I didn’t know about rankforest until then). There are problems with amazon rankings, but they’re an easy indicator to track.

Who knows if these efforts help – plenty of books do well without things like this, and many with big promotion budgets do poorly. It’s complex and a topic for another post.

However it happened, the book has been a big success. Thanks to all of you for visiting, reading, buying and spreading the word about the book. Every sale motivates me to work that much harder and write that much more.

The pairing of writing books and being for hire as a trainer/consultant feeds off each other: people who like the book often hire me and people who hire me often buy the book. So for any would-be writers out there, this is a great approach for a first book.

I’m doing well and have signed to write a second book for O’Reilly – I’m on track to put another dent in that shelf.

For fun, comparative data is listed for Malcom Gladwell’s book “Blink”. Not sure what happened to him on 10/16, but it looks like he survived his largest rank-drop: from the teens down to 57. 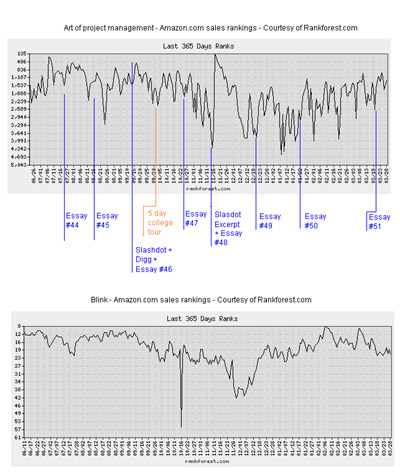 10 Responses to “A year in the life of a book: a summary”