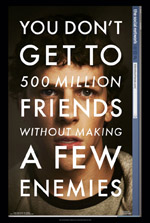 ood movies about software are hard to make. That’s why few people try and those who do mostly end up with mediocre films. David Fincher (Fight Club, Curious Case of Benjamin Button) gets at least one thing right in his new film: pace. This movie, for a drama about young adults making software, is smart, quick and unrelenting in its progression. The Social Network is a good, well acted, well scripted drama, which provokes questions about ideas, ownership, ethics and relationships (End of short review).

I didn’t read the book the film is based on, Accidental Billionaires, as the author’s style of dramatization and invention (He also wrote Bringing down the house) has earned him a reputation for stretching the limits of what can be called reporting. Its foolish to expect Hollywood films to have much interest in upholding literal truths.

However I have researched Facebook’s history and it’s clear Zuckerberg was not a good guy in his early years (The New Yorker profile suggests Zuckerberg conceeds this). He managed to upset many people he worked with, was sued by some of his first employers and his best friend / co-founder of Facebook. The details of the movie are exaggerated as films, by their nature, tend to be, but the spirit seems not far from the Mark (pun!).  And it’s this spirit that’s the most interesting aspect of  the film.

Nearly everyone is portrayed as shallow, arrogant, selfish and superficial. Some are fools, others are brilliant, but the tone is youthful confusion over what matters most. And this reflects our dilemma over what to make of the worst elements of social media: a playing out of high school cliques, displays of ‘status’ to impress others, and a confusion over what a friend or authenticity actually are. The movie itself shows “a social network” with Mark at it’s center – but its a sad, broken and treacherous one.

The film has been criticized for poorly portraying women, which is true, but this misses how the film poorly portrays everyone. Nearly every character is an embarrassment in some significant way, and the movie is largely criticizing the shallowness of elites (Harvard, Silicon valley, lawyers, VCs, the upper class, etc.).  The movie is a critique of the kinds of people who would choose to profit from changing the world based on the model of “facebooks” (e.g. yearbooks), relationship status, feeds and friending people. The point is:  it’s a 19 or 20 year old’s view of the universe, for better and, as the movie emphasizes, for worse. It’s notable Zuckerberg’s fiancé, with whom he was dating the entire duration of the time shown in the film, isn’t mentioned much less seen. But otherwise it’s hard to find particular bias: I doubt anyone feels great about how they are portrayed in this movie.

I’ve never met Zuckerberg, but his portrayal is reminiscent of people I knew in my Computer Science classes at CMU and in the tech sector today: young men who are arrogant, shy, brilliant, awkward, angry, passive-aggressive, misunderstood and possibly vicious.You’ll find some people like this in any CS classroom or in any tech start-up or IT department. One appeal of computers is they do exactly what you tell them, much unlike people, which tends to attract people with particular abilities and disabilities. Bill Gates near cameo in the film is telling – go watch his deposition video and it’s clear he and Zuckerberg, as portrayed, have much in common (Of course anyone deposed is bound to be cranky, but still).

And more interesting, Bill Gates, Steve Jobs, Larry Ellision, Andrew Carnegie, Andrew Mellon, Henry Ford and dozens of others of captains of industry weren’t lovable, likable or ethical either early in their careers (if ever), despite how we lionize them later. Films of their early lives would have similarities to The Social Network. Simply put, no one is forced to be a CEO or start a company. Those who do are often fueled by greed, arrogance, pride, insecurity or a need to prove something to someone who probably isn’t even paying attention, a point it’s clear David Fincher intended to make.

But much like the film Wall Street, which showed the tragedy of the power brokers in finance but instead created a hero (Gordon Gecko) for a certain group of people, The Social Network, which was clearly designed as a tragedy, will have the same fate. Many young entrepreneurs will see having a business card with “I’m CEO, bitch” as a goal worthy of spending their lives chasing, missing how much personal carnage this psychology created for this particular CEO and everyone around him.