In a series of posts, called readers choice, I write on whatever topics people submit and vote for. If you dig this idea, let me know in the comments, and submit your ideas and votes.

This week it’s: Why does transparency matter? submitted by Nick Finck. 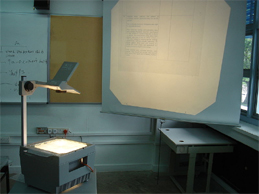 Whenever I hear talk of transparency I think of overhead projectors. This dates me significantly, but it used to be professors wrote their lessons on sheets of cellophane called transparencies. These were thought to be clever since the clear sheets let the light through, making what you wrote on them visible.

Transparency is good for this reason. It lets you see. In management literature these days transparency is seen as good. If Rupert and Marla can see what the CEO is thinking, or what the actual revenue numbers look like, they’ll better understand why they’re being asked to do whatever they’re doing.

So Level 1 of transparency is achieving clarity. You give access to more information so people can see what is going on and why. The challenge is the more others see of how things really work, the more complex it can seem. Reality is a mess. Most people, most of the time, don’t really want to know how the sausage is made, despite what they say (e.g. Many talk about food, but are afraid to watch Food Inc.). When you open things up in the spirit of transparency it can be disruptive and confusing if not done carefully. Or if you haven’t hired people who can handle so much of the truth.

And even if the top secret plans are well thought out and explained well, you have a new problem. What happens if Rupert sees flaws in the CEO’s thinking, now that its been revealed? Is it acceptable for Rupert to ask questions? Will the CEO accept them respectfully? Will he incorporate good feedback? If not, then transparency is one way, and has limited value. If my plan as CEO is to do something very stupid, say to start a chain of hamster-burger franchises, and the world hates hamsterburgers, yet I insist on betting the company on them, transparency doesn’t help much.

The real goal is Level 2: achieving better thinking.  But this doesn’t happen merely because people can see what’s going on. Better thinking happens only when leaders listen to feedback and incorporate better ideas into their plans.  Being transparent and open might increase the odds better thinking happens, but it doesn’t guarantee it. Leaders still have to behave graciously when criticized, and reward people who come forward with good ideas, and not with token praise, but with the true reward of improving the plan based on their ideas.

When it comes to marketing, transparency is more contrived. If someone is selling a product or service there are some things they will never say, even if they know them to be true. They will never say “This product is not as good as our competitors”, “Our customer service sucks” or “I know this sounds cool but we know almost no one uses it after they buy it”.  Wise consumers know this. We keep in mind there are a set of things marketers and sales people will never ever say. If the dynamic is sales or PR there are unsaid but fundamental limits to how transparent the message can be.

Social media rhetoric often uses the word authenticity, but it’s the wrong word to use. The web and social media have humanized sales and marketing, as the personality of human beings comes through in greater force.  But that’s not the same as being authentic. Marketing is the wrong school of thought to use to determine what is authentic and what isn’t, don’t you think? The words “old-fashioned” and “home-made” appear on goods made in large, new factories, thanks to marketers and their talents.

Trust is always more important than authenticity and transparency. On the human level, to say “Fred is so transparent” means something negative. We literally mean we see through him to his untrustworthy core. The more I trust you the less I need to know the details of your plans or operations.  Honesty, diligence, fairness, and clarity are the hallmarks of good relationships of all kinds and lead to the magic of trust.  And it’s trust that’s hardest to earn and easiest to destroy, making it the most precious attribute of all. Becoming more transparent is something you can do by yourself, but trust is something only someone else can give to you. If transparency leads to trust, that’s great, but if it doesn’t you have bigger problems to solve.

2 Responses to “Why does transparency matter?”