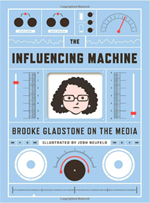 We often talk about “the media” as if it were as singular monolithic thing, which it isn’t. Any argument that includes the phrase “the media” should be challenged as it’s an oversimplification likely being used to make a self-serving point. Every political point of view now has their own blogs, videos and social media: the media you experience is in part defined by your choices.

This bias we have towards oversimplifying media is one of our greatest problems in trying to understand the world today. When you stop and avoid saying “the media is…” you’re forced to think more carefully about what you’re really upset about and what the real causes are.

A great way to elevate your thinking and get past your pet biases about mass media, is the book The Influencing Machine, by Brook Gladstone (of NPR). 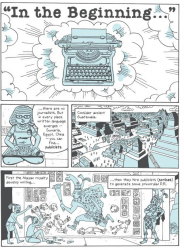 It’s a graphic book, illustrated well by Josh Neufeld, which means it’s a combination of comic like panels, mixed with short essays. I like this style of book when it’s done well (this one is), but it’s not for everyone.

The strengths of the book are its telling of (U.S.) media history. It explores the problematic origins of journalism,  how the early press in the U.S. developed (which is shockingly familiar to many who complain about modern journalism), and the inherent good and bad challenges it has wrought throughout our history. Some stories I knew, but others were launching points to research online. Gladstone takes the position that we are a large part of our sense of “media”, as we make choices about what we read, how we read it and the questions we choose to ask or not.  She also explores the challenge of objectivity, and challenges the notions most people assume about the objectivity of what the read and hear.

The weaknesses of the book are twofold. First, if you’ve studied media theory and cognitive bias, you’ll be on familiar turf. Second, the last quarter of book switches into future thinking, and here Brookstone is on weaker ground. The book is stronger in its telling of history and Brookstone’s insightful view of how media has functioned, rather than her looking to the future. It’d also be easy to criticize the book for a having a mild liberal tilt, as some negative examples come at the expense of (in)famous Republicans/Conservatives.

The book lightly touches on social media’s impact, which is fine. But it is notable Brooke didn’t have a twitter account when the book released (she does now). However Josh Neufeld does.

It’s a fast read as most good graphic books are, and will definitely improve how you think about media in all its forms.