People who design things for a living depend on optimism. To do their job well, whether it’s designing websites or automobiles, they must believe they can make things that are better than what currently exists in the world. The problem is that this optimism, when combined with immaturity, creates a shallow view of how organizations work and how decisions get made.

Designers claim, and often with good reason, that they understand human behavior better than others, but their distaste for what they call politics reveals they’re unaware of one of the most natural behaviors people in groups have. Designers who don’t comprehend or wish to avoid all politics betray their own ideas by not recognizing how politics defines the human landscape they must work on.

The confusion stems from the two different meanings of the word:

When someone says “I hate working in Stan’s organization, he’s so political” they’re using the first definition, and they specifically mean the abuse of power to serve someone’s self-interest or the creation of a culture of fear and dysfunction. These are bad things, for sure, but often the word politics is used in a lazy way, by someone who simply doesn’t understand why their ideas get shot down, or why they’re not given the power they think they deserve. Rather than examining the culture they’re in (who is thriving here? what are they doing that I am not? Do I need new skills or a new job?), they blame the very concept of politics.

The hard truth is that human nature is political (2nd definition above). The fields of sociology, anthropology and psychology are largely about the complex challenges of people trying to get along with each other (and themselves).

Put simply, when you organize people to do something, whether it’s throwing a party or starting a company, each individual has their own opinions on the right way to do it. And they have preferences for who they like to work with and what tasks they like to work on. This means no matter how talented leaders of an organization are, some people will not get everything they want.

This motivates people to influence those with power or to try and take it for themselves (and if raises, promotions and prestige are at stake the tendency for people to forget their ideals increases). There are of course many ways to express ambition, some much healthier and more transparent than others, but politics are everywhere people are.

“Every management act is a political act… in some way [it] redistributes or reinforces power.” — Richard Farson

Blaming “politics”, in the abstract, is a convenient way to avoid taking responsibility for solving problems. The same is true for pointing fingers at “management,” “engineering,” or “marketing” and saying how stupid they are (See: The Fallacy of ‘They Don’t Get It’). Of course it’s true you could work in a completely dysfunctional place where even Machiavelli could not succeed, but it’s far more likely there are reasonable forces at work you don’t fully understand.

Pointing fingers doesn’t make those you point at any less stupid or ineffective, and it deflects any personal responsibility for learning how to be more persuasive, collaborative or thoughtful in how you approach working with them. And who knows, it’s possible that with a careful eye, it might just be that what you see as incompetence in another is just a smart person constrained by similarly difficult political factors that you can’t fully see. Of course some workplaces are truly broken, but that mostly raises the goal of finding yourself a new place to work. When a designer, a natural optimist, is pessimistic about who they work for and with, it’s time to move on.

Designers love to talk about their mastery of problem-solving skills, but politics is just another kind of problem-solving: people problems. If you approach organizational problems with the same optimism, discipline and creativity that you approach a design or engineering problem, you can find alternatives to explore and use them to make better decisions. And this is the grand irony of designers complaining about politics: designers should be great at the combination of problem-solving and understanding people, yet so often they can’t escape their frustration that these problems even exist.

The greatest factor in your political experience of an organization is your boss. A good manager will buffer you from organizational drama and set you up to succeed, while a bad one will amplify the worst problems an organization has. For designers, this means the heaviest political burdens land on the most senior designer in their organization. It’s their job to pave the way for all the people who work for them, establishing relationships with other powerful people in the organization.

But sadly design as a profession suffers from the Peter Principle. The problem of overpromotion is universal in the working world, but design is a specialized enough field that often the people who become design directors, or executives, are far better at designing than directing, leading or managing. In the best cases they know their primary job is to be an ambassador of design to the CEO and other executives, to form partnerships, align goals and gain influence that can be transferred down into their own organization. But even as an individual designer without much support from above, there are still many things you can do.

The way forward is that politics, even in the healthiest organization, is based on your reputation. The same organization will feel very different if you have a great reputation for getting good work done vs. having a poor one (or no reputation at all). This means earning trust and cultivating respect from your peers and superiors is the path. This is far more productive than allowing your audible frustrations at “politics” in meetings be the primary way people know you. And much like designers study users, they can also study their coworkers and superiors. By asking simple questions, much can be revealed that makes healthier politics possible: 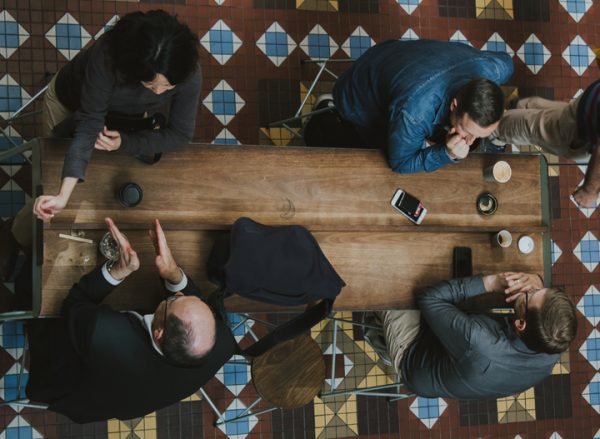