I recently wrote a harsh review of Prezi, focusing on how that tool makes it easy to make distracting, annoying presentations. On the other end of the spectrum is a new iPad app called Haiku Deck.

Haiku Deck takes a radically simple approach. The tool has very few features. It lets you pick background images and then write a sentence of two of text over them. That’s it. It’s incredibly simple, but this is very good for audiences everywhere. A major problem in most presentations is how complex and overwrought they are. Most people start by making elaborate, complex slides, believing it’s the slide that makes the talk, rather than their clarity of thinking.

Using Haiku Deck will help many speakers avoid many of the common traps. You can’t cram your slides full of bullets. You can’t make complex flowcharts with tiny 8pt font labels. Haiku pretty much ensures you’ll follow much of the advice in Garr Reynold’s classic Presentation Zen. Simply put, you are forced to keep your slides clean and simple, meaning you have to do the heavy lifting of thinking through who your audience is, and what they need to learn from you, which is the only way to make a better presentation anyway. 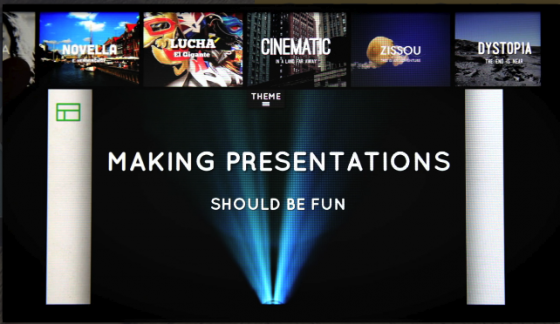 A major time sink in making good slide decks is finding images to use, but Haiku helps there too. It automatically queries rights free image databases, allowing you to confidently include images that you have permission to use. Of course you can use your own photos too.

An easy complaint die-hard Powerpoint/Keynote users will have is how many features, from flowcharts, to shapes, to graphs, they may think they depend on are not in Haiku Deck. In most cases they will be better off, as all of those things were less effective than they think anyway. Haiku does support exporting to Powerpoint (which I have not tried).

My major complaint is entirely selfish: the basic style Haiku deck uses, with full screen images covered by a single point in an easy to read font, is the core style I’ve used in my own talks for years (especially at Ignite talks). I fear if Haiku deck becomes popular I’ll look more like a follower than someone a little ahead of the curve.

The app is free. You can share your presentations on Twitter, Facebook, and by email.  I’d guess they’re planning to offer style packs and add-ons for cost in the future, but the core app is free.

Leave a Reply to Kevin Leneway