Paul Graham wrote recently on his perspectives on the written vs. spoken word.

Graham admits he’s more confident as a writer than a speaker. This biases his comparisons and his essay. He’d have benefited from talking to people who he thinks are both good speakers and good thinkers (and perhaps good writers) as they’d have the balanced perspective he admits he does not have. He writes:

Most writers are unable to write in plain words or unable to find good ideas. Why? I don’t know, but it’s harder than Graham suggests for most people. Graham has ideas and does write well in a simple style, but he’s assuming most people can do it because he can. Read the web for an hour: this is not the case. It’s splitting hairs to argue over whether there is more bad writing or bad speaking on planet earth since there is so much of both.

Speaking is harder in many ways than writing because it is performance. You have to do it live. Some people who do not like to perform try to do what Graham does: they try to memorize their way through it, which doesn’t work. You tend to fail when using a method for one form in another form. Performance means there is no undo and no revision, which is a huge part of the appeal of seeing bands and people do things live and in person. It’s why I’m paid more as a speaker than I am as a writer:  the same was true for Mark Twain, Charles Dickens and even David Sedaris or Malcolm Gladwell.

Writing is harder in some ways than speaking. Writing must be self contained: there is no body language or vocal emphasis as everything must be in the words themselves. But the ability to revise and edit dozens of times narrows the gap. With enough work you can revise your way into competence. Yet speaking is performance: there is no revision of an event. You can perform it again to improve on mistakes, but each instance must be done every time. When you finish an essay, it is done forever.

With speaking it’s the opposite: having good ideas is an alarmingly small component of being a good speaker. I first noticed this at a conference several years ago. There was another speaker who was much better than me. He had all of us roaring with laughter. I seemed awkward and halting by comparison. Afterward I put my talk online like I usually do. As I was doing it I tried to imagine what a transcript of the other guy’s talk would be like, and it was only then I realized he hadn’t said very much.

This confuses entertainment with expression. Popular writing can be similarly hijacked – look at twitter and the web – all media has this problem. There are different tricks to use in each form, but an essay can make you laugh, or make you angry, or make you hit the Facebook like button, despite not saying much, or anything at all.

I do agree with Graham that some speakers and “thinkers” are popular solely because they are likable and entertain, or infuriate and inflame. But this is a failing of all mediums, including writing.

A few years later I heard a talk by someone who was not merely a better speaker than me, but a famous speaker. Boy was he good. So I decided I’d pay close attention to what he said, to learn how he did it. After about ten sentences I found myself thinking “I don’t want to be a good speaker.” Being a really good speaker is not merely orthogonal to having good ideas, but in many ways pushes you in the opposite direction.

Emerson, Gandhi, Churchill, MLK, Jesus, Socrates, Lincoln, Mandela. These are a handful of great thinkers who used speaking as a primary medium of expression.

It’s true that much of what some of them spoke was heavily written before it was spoken, but the world experienced these ideas first as spoken words.

I have to stop here to acknowledge that the history of thinking was spoken. The Ancient Greeks, where many of our big ideas still come from, talked. Writing as a primary way to express ideas wouldn’t arrive for 1500 years. Talking and thinking have a much older relationship than writing and thinking. That doesn’t mean speaking is better – writing has many advantages – but to sweep speaking aside is foolish, and reflects Graham’s bias more than his wisdom.  Many ideas at many startups are discovered, shared and developed through spoken words. Pitch meetings, arguments at whiteboards, late night hacking sessions, discussions over lunch: it’s heavily spoken word. Life is mostly spoken, not written.

The way to get the attention of an audience is to give them your full attention, and when you’re delivering a prewritten talk your attention is always divided between the audience and the talk—even if you’ve memorized it. If you want to engage an audience it’s better start with no more than an outline of what you want to say and ad lib the individual sentences.

This is where Graham, whose work I admire, makes a big mistake. He has admitted he’s not a good speaker and doesn’t like the form. Why then does he feel qualified to give advice on how to do it well?

In my bestseller The Confessions of a Public Speaker I carefully explain audience attention depends on answering questions they came to hear. The majority of speakers fail at this, focusing on what they themselves wish to speak about, or what their slides will look like, rather than their audience. Speaking, like writing, is an ego trap. It’s not about you, it’s about them: what questions do they want answered? What stories did they come to hear? If you understand why your audience showed up at all, and deliver on it, you will keep their attention. Graham’s advice is all about the speaker, but that’s the common tragedy – it’s not about speaker. A speaker who studies the audience and puts together content that addresses their interests will always do well. They’re rare.

Before I give a talk I can usually be found sitting in a corner somewhere with a copy printed out on paper, trying to rehearse it in my head. But I always end up spending most of the time rewriting it instead.

I would never do this. I stay up late the night before, if needed, to finish preparing. I practice the talk several times, revising if needed, until I’m comfortable. This comfort allows me to be fully present with an audience and not worried about my knowledge of my own material. This is also how I ad-lib or change directions based on a live audience. My preparation gives me the confidence to make adjustments.  An hour before my talk I’m not thinking much about my talk at all. 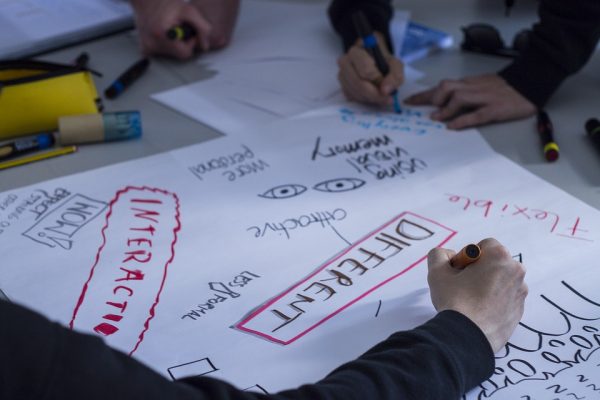 Related: An open letter to speakers, which gives specific practical advice on speaking.

20 Responses to “On Writing vs. Speaking”