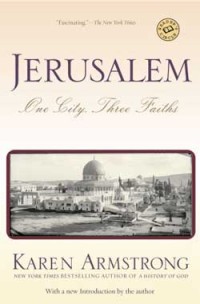 I have a fascination with religious history. It’s a fantastic lens on the history of civilization. I’ve never had much faith, but the history of it, and the details of various scriptures have held me fascinated for years. The way the roots of all religions wind together mythology, history, culture, selfishness, compassion, wisdom and ignorance is an amazing way to understand our species.

A few weeks ago I visited Israel. I spent three amazing days in Jerusalem. On returning, my passion for history was rekindled and many books I’ve read since I returned were about religion and religious history.

The prize gem of this research has been one book: Jerusalem: One City, Three Faiths by Karen Armstrong. It focuses on religions that trace back to Abraham, so there is no coverage of Hinduism, Buddhism, or other beliefs, but many of the lessons I learned from Armstrong have clear applications to any system of belief. The book is short, powerful and well written.

The book uses the city of Jerusalem, a central place in Judaism, Christianity and Islam, as the focal point for history of all three faiths. From the shift from paganism to early Judiasm of the Old testament, to the birth of Christ and the diaspora of the Jews, to the rise of Islam, and the centuries of fights over a very small piece of land, many of the questions you’ve had are answered here.

Armstrong focuses on history, not faith. She clearly has knowledge of all three religions, as those are discussed, but her intent is to provide a balanced view not dependent on a particular belief. The book has been criticized by some for it’s lack of balance, but I found her view, as someone with little at stake, impressively fair . Her main bias seems to be towards compassion and against violence, as she critiques everyone when they fall short of their own scripture in this regard.

Some of the facts I enjoyed most were:

I’ve always wished every citizen of the world had to take a short course in comparative religion. It would stop a lot of violence. This book would make a fantastic start.  If you have any curiosity about the links between faiths, I highly recommend this book.

18 Responses to “The history of religion: explained”