In an HBR article called The Dirty Secret of Project Management, the author claims the secret is no one believes in their schedules. I don’t agree that it’s a secret, but that’s not the point. Forget whether a schedule is ‘right’ or ‘wrong’. Even if a project ends up months behind it probably did several important things. 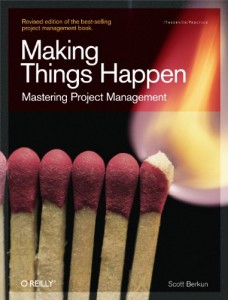 Schedules, no matter how inaccurate they are, can do the following:

Of course you want an accurate schedule. But even if you don’t have one, schedules provide important things successful projects need.

This is an excerpt from Chapter 2: The Truth About Schedules, From the bestselling book, Making Things Happen.

3 Responses to “Why schedules help even when they’re wrong”