Judging by the low number of comments, my book tour travelog has been a snorefest so I’ll wrap up the remains in one post.

Friday 10/14: I dropped in at Razorfish and Google NYC and talked about user centered design, leading development teams and the challenges of making good things. One of the folks at Razorfish, Vincent Santo, was an Interactionary survivor and we chatted about that. Karen McGrane, my excellent host, was great and as cool as I expected. Over at Google I was hosted by Leslie Yeh, who worked on my team for awhile back at Microsoft. Their office near Broadway was slick: 3 stories cut away into a central opening, with enough room for two basketball hoops. My kind of office.

Monday 10/17: As a kid I walked by the Cooper Union campus dreaming about going there one day. Well the day came: I got to speak to 120 students and faculty about lessons I learned at Microsoft. It turned out much of the crowd were freshmen, so I quickly ditched most of my slides and let them ask me questions for an hour. It was a thrill and an honor: after a few jabs at MSFT the focus turned to business, innovation and the differences between being a student and a professional. Best question asked: Who would win in a fight, Bill Gates or Steve Jobs?

Tuesday 10/18: The full circle was complete: I spoke at CMU where I graduated in ’94. Catherine Copetas was my fantastic host with CS department and set up two talks: a small informal talk and a big lecture. The lecture was in Wean 7500: A room I had fallen asleep in countless times as a student. Speaking in that huge cavern of a room was a right of passage. Bonnie John, the director of the masters program at the CMU HCI institute, and a former professor of mine was there and we chatted afterwards. It’s fantastic to see that what was a collection of courses when I left, has blossomed into an entire HCI group: they’re setting an example for other CS departments to follow.

Wednesday 10/19. Had I planned better, I’d have used this day to see more friends in Pittsburgh. But I was exhausted and mostly slept late at Faisal‘s and then crawled out to Shadyside and wrote in a coffeeshop on Walnut Street. I ate a late breakfast at the legendary Pamelas, bought a sandwhich to bring home to my wife at the Peruvian place (La Feria), and spent a ton of cash on cool CDs at the world music store. Walnut street still has a special quiet hip charm hard to find in most cities.

Thursday 10/20: Homeward bound. By 4pm I was back in the woods and sleeping comfortably, with my dog Max, on the couch. 12 days, 3 cities, 9 talks, lots of cool new people and old friends, but time for sweet dreams.

If you want lesssons learned from this, my 2nd book tour, comment away. Otherwise I’ll leave the tour behind. 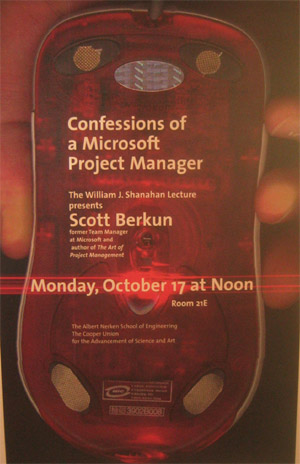