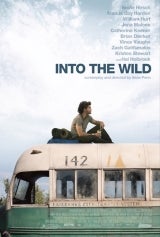 This is in two parts: first, a quick and dirty movie review. Second, a short essay on the book, the film (trailer), and the mythology of Chris McCannless.

Movie Review: Recommended. High appeal for anyone interested in self-exploration, nature, the limits of freedom, and the idea of philosophical integrity (do you actually do what you believe in?). It’s based on a true story of a young man who leaves his upper-middle class family behind to adventure in the American West. There is some brilliant storytelling and adventure and the performances are excellent (Emile Hursch is great as Chris). However, the pacing runs into trouble, with long and forced narrative points and occasional over-stylized editing. If if you’re interested in the above themes, you’ll like the film anyway, but if you hate Thoreau and can’t stand nature, then stay away: you’ll be throwing your popcorn at the screen. There is a excellent film in here, but it does sit interspersed with 25 minutes of oddly paced material (I have a similar criticism of the otherwise excellent book) and your tolerance for it will hinge on your interest in the themes.

Essay: (No spoilers here, but what i say might not make sense if you’ve never read the book nor saw the film). I read the book Into the Wild years ago and loved it. After I saw the film last week I was so confused as to what was in the book, and what was created for the movie that I went back and read the book a 2nd time. What I found there surprised me: many of the seemingly cheezy plot points, his relationships with the young girl and the old man, are actually in the book.

The book is philosophically important – I’m prone to rejecting the status quo and share many of the ideals, or at least the questions, that McCandless had. The story stuck with me for years and seeing the film doubled it’s power. I fully admire the guts it took to walk away from everything and start over (giving away all my possessions is something I’d like to do), but at the same time I’m repulsed by the cruelty involved in walking away from his family, and especially his sister. Does independence demand hurting people? Can you be half-way independent, or as McCandless believed, is it an all or nothing proposition? The story has been a forcing function for me, looking back at my decisions to leave places, people and things, to see what damage I caused in the name of ideals.

The film and the book differ on one major perspective: The film lionizes McCandless, something hard to prevent since he’s the main character of the film. Watching him take pleasures from life most wish they could find makes him charismatic despite what he had to sacrifice to get them. But the book is merely sympathetic to the lead in a cautionary tale, and goes out if its way to analyze and dissect his decisions, showing the possibility, in retrospect, of achieving his ideals without sacrificing sanity. And that’s where the story has its power: I feel compelled to re-evaluate the bar on my ideals, and the all too easy habits I’ve developed have for resisting them. McCandless’s story, in whatever form it’s told, can’t help but force people to consider the gap between their behavior and their ideals, since without a penny to his name, he lived, for a time, exactly how he wanted.

Leave a Reply to subhasish christche