Through the magic of netflix and xbox, I can now watch the 80s TV series MacGyver. And what a joyous snarkfest it has been.

I watched the show as a kid, and I’ve written about him in reference to creativity (See do constraints help creative thinking?). But watching the show now was mind blowing for reasons I never expected. 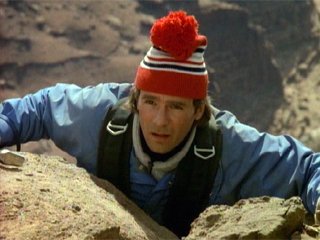 The pilot episode is an amazing cultural artifact all on its own. Pilots are always weird. Watch the first episode of your favorite shows and you’ll consistently find the humor and pacing off, the acting stiff, and the focus of the show often much different than what the show became known for later.

In this case it’s clear the pilot, and the whole show, were made well before the hyper realism of CSI, and the procedural logic of Law and Order. Back then you could get away with a TV hero who lives in a mansion sized NASA grade telescope laboratory, defuses the cheesiest looking nuclear missile in twelve seconds with a paper clip, does his own voice overs, works as apparently the only agent for a squad of the most incompetent secret agent bureaucrats ever on TV, charms the girl, defuses more bombs, stops acid leaks with food, while cracking corny geekish jokes and smiling in a way that suggests he wouldn’t mind an early death, a suggestion that redefines the meaning of bizarre given how frequently the writers remind us how good natured, polite and wholesome this country boy is as he does good things like save the world 5 times an episode.

Forget the fun of wild ingenuity and brains over brawn I remembered the show for – which is there in moments – instead the show works on an entirely deeper level as a time warp back through television history when this sort of fantasy was acceptable entertainment. The only way this show could work today would either be to go towards CSI, and become an inventors 24, or run towards satire and camp like Get Smart, making fun of hero shows by winking at the audience. But MacGyver sits right in the middle in no mans land, which makes the pilot episode a fascinating watch.

The pilot episode is also available online, for free on fancast.