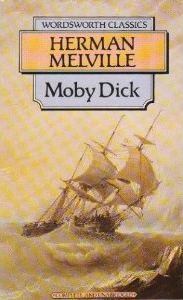 Years ago, when I decided to become a writer, I decided I should read the classics I’d managed to dodge in school. While Heraclitus said it’s impossible to step into the same river twice, as a river is always changing, with books, they stay the same and we change. Reading books again helps me sort out how I’ve changed and why.

I’ve discovered some classics do not age well (I found Defoe’s Robinson Crusoe impenetrable), but others kept their powers for me (Catcher in the Rye, The Great Gatsby). It’s easy to forget there are both bad and good reasons for a classic to remain a classic, sometimes it’s not much more than cumulative advantage.

6 years ago I picked up a copy a Moby Dick in a used book store, read the first page and thought it quite inviting. Since then I’ve traveled with Moby Dick a dozen times, never finding the courage to dig in. I’d see it on my bookshelf, or on my desk, and it would gnaw at me: the book had become, all on it’s own, my private little white whale. And so last week, on vacation in Mexico it came along yet again. And I finally read the whole damn thing.

I did enjoy it Moby Dick, but not in a way I’d recommend to most people I know. I was reading it more as a writer than a reader, if that makes any sense. Writers do this. We want to understand how books work.

(Actual review starts here) – The problem with the book (or its brilliance if you are patient enough) is that Melville is a tease. The first 80 pages presents itself as a charming, funny, intriguing tale of life in whaling. He writes very well, and has some brilliant prose and pacing. But he slowly unwinds the book into wider and wider circles of pedantry, indulgence, and esoteric ramblings that more than try your patience. Ahab, the most well-known character from the book, can’t be mentioned on more than 80 of the 544 pages of the edition I read.

This means in one sense the majority of the book is a whaling manual of sorts, with encyclopedia-like entries and opinion essays on various aspects of whales, whaling, and seafaring culture. Melville also shifts narrative form wildly in the book, sometimes he’s Ishmael, sometimes he’s Melville, sometimes he’s a sort of movie-style narrator (approximating Shakespearean stage direction). And Melville loves his references: my edition had 300 endnotes, half of which are sailing terms, the rest are biblical or literary references critical to understanding his sentences. The movie version with Gregory Peck (screenplay by Ray Bradbury) provides the experience many people would expect in the book, a well paced tale of adventure, but it’s a good example of what can be lost which switching from written forms to visual ones.

I diligently read every page, resisting the urge to skim and skip, exploring if I could resist the temptations of my attention. And in so doing I learned how much wider the idea of a novel is than I’d thought it could be.  He successfully (at least in terms of posthumous readership, the book didn’t sell that well in his lifetime) manages to twist the concept of a novel into various odd shapes, with strange and unwieldy corners – it made me rethink the notion of what a book, fiction or non-fiction, can be like. As a writer, I’m glad I read the whole thing.

The best possible take on the book is that Melville desired to give the reader a similar obsession about the white whale to the one Ahab has. The longer the book went on, the stronger the sense of craving, and then obsession, I had for the core narrative to continue. As Ahab hunts the whale, so does the reader hunt the story of Ahab and the whale in the book. A minority of the non-narrative chapters are exceptional essays (The Hyena (49), The Monkey-Rope (72), Fast-Fish & Loose-Fish, and the chapter on the concept of white) that I marked well and might reread. A dozen or so passages in the book, often about Ahab or philosophy, are exceptional. But for a book of this length, I had a fairly low number of passages marked to return to and reread.

My edition (Wordsworth 2001) included a 15-page introduction by David Herd that bordered on worship. Thankfully I read it after I finished the book, as it would have ruined the reading (as introductions of classics often do). He grants every possible benefit of the doubt to Melville, often without much real evidence of Melville’s intentions. Apparently, Melville had reservations, stating “It will be a strange sort of book, tho’, I fear; blubber is blubber you know; tho’ you might get oil out of it, the poetry runs as hard as sap from a frozen maple tree”.

And I’m compelled to say for no particular reason, Melville’s Bartleby the Scribner remains one of my favorite short stories. It’s quite the opposite reading experience from reading Moby Dick.