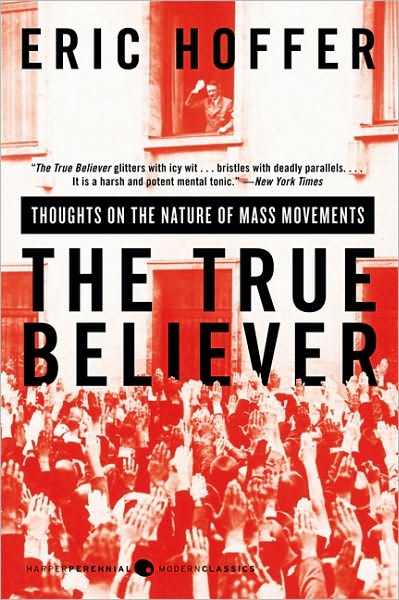 Somewhere back in college I became familiar with The True Believer: Thoughts on the Nature of Mass Movements. It was one of those books I’d heard of, but never read, despite owning several used copies of it. Recently on twitter I posted a quote of Hoffer’s that I’d found years ago, which led to a conversation and actually reading the book.

“Faith in a holy cause is… a substitute for the lost faith in ourselves” -Eric Hoffer, The True Believer (#)

One foundation of philosophy is the question “Why do you believe what you believe?” it’s a core part of epistemology, yet rarely do we slow down enough in daily life to follow that question all the way down. We expect that the deeper we go, the firmer the answers become, but the opposite is true. Any child who continually asks “Why?” demonstrates, to the frustration of their parents, the further you go the fuzzier the answers get. It’s easy to discover, if you’re willing to dig, that many of our beliefs are absorbed socially. We simply believe what we believe because we’re around people who believe those things. Or we explicitly were told what to believe by parents or teachers early in our lives.

Belief might be primarily a social function, a matter of psychology and culture, rather than intelligence. And if it’s a social function, how can anyone who believes anything be sure it’s worth believing in? That a particular belief is morally, or even selfishly, good? Especially if they’ve never believed anything else? Are there different kinds of faith? How do you know what kind you have? These are dangerous questions. Questions most people don’t want to ask, much less do the hard work of an honest search for answers.

This explains why The True Believer was such an interesting read. Hoffer takes on the entire notion of movements, political and religious, and attempts to cast a single net over the lot of them. It’s a challenging read not because of the writing, Hoffer writes simply and clearly, but because of the sizable questions he packs into each page.

The problem with, and the delight of, the the book is it’s written in a style rarely seen anymore. There aren’t ten rules or six pillars. He doesn’t spoon feed solutions or meanings. Instead he sweeps over history, sometimes making unfair generalizations or skipping past obvious counterarguments. The book is a polemic, although he quotes enough history, when convenient, to pretend otherwise. As someone who has never been formally part of a religious group even I had trouble with some of what he says. Not because I disagreed with the negative light he puts over his subject, but because I found the way he made his points unfair. I had similar feelings about the opening chapters of Sam Harris’ The End of Faith. Hoffer writes concisely and you’ll need to do some legwork to vet his claims and references as it’s not always a fair playing field, but that’s part of the fun of polemics. They are great to read with friends, especially friends with different points of view.

The core theme of the book is a scathing view of human nature and the dangerous patterns of how we unite in society. It’s no accident Hitler is shown on the book’s cover, as Hoffer’s demonstrates how we, as a species, are prone towards mass movements (Freud’s Civilization and Its Discontents has a similar thesis). He explores the patterns and elements that build them, the psychological drives they satisfy, and the blind spots we have against reason while we’re in a mass movement. This has implications for everything: organizations, governments, religions, corporations and more. Consider sports teams, fandom of rock stars, nationalism,political campaigns and on it goes. The patterns he describe are offered as universal, suggesting this is simply part of who we are. Is it morally good to have 50,000 followers on twitter? Is the ambition to create a corporate brand known, or worshipped, by millions much different from a cult? All these questions came to my mind while reading this book.

He never gets around to exploring the upsides of mass movements (or declaring he thinks there aren’t any. The book was written in 1951, before the U.S. Civil Rights Movement). Nor does he offer antidotes or countermeasures, which makes the book feel like a warning bell. Can a mass movement be moral? Can it have leaders who don’t, as he identifies, use the movement for their own advantages? He never gets that far, but perhaps he doesn’t need to. Reading the book will leave you with many big questions about who you are, which is all any curious reader can ask from a book.

The meta question: is Hoffer’s book, given its popularity, guilty of the things the book criticizes? Can you have a mass-movement about questioning mass-movements? I’ll be thinking about this for some time.

Here are some of the passages I marked from The True Believer:

Those who would transform a nation… must know how to kindle and fan an extravagant hope. It matters not whether it be hope of a heavenly kingdom, of heaven on earth, of plunder and untold riches, of fabulous achievement or world dominion. pg. 9

One of the most potent attractions of a mass movement is its offering of a substitute for individual hope. This attraction is particularly effective in a society imbued with the idea of progress. pg. 15

They who clamor loudest for freedom are often the ones least likely to be happy in a free society. The frustrated, oppressed by their shortcomings, blame their failure on existing restraints. Actually their innermost desire is for an end to the “free for all.” They want to eliminate free competition and the ruthless testing to which the individual is continually subjected in a free society. pg. 33

If a doctrine is not unintelligible, it has to be vague; and if neither unintelligible nor vague, it has to be unverifiable. One has to get to heaven or the distant future to determine the truth of an effective doctrine. When some part of a doctrine is relatively simple, there is a tendency among the faithful to complicate and obscure it. Simple words are made pregnant with meaning and made to look like symbols in a secret message. There is thus an illiterate air about the most literate true believer. He seems to use words as if he were ignorant of their true meaning. pg. 81

There is also this: when we renounce the self and become part of a compact whole, we not only renounce personal advantage but are also rid of personal responsibility. There is no telling to what extremes of cruelty and ruthlessness a man will go when he is freed from the fears, hesitations, doubts and the vague stirrings of decency that go with individual judgment. Pg. 100

The missionary zeal seems rather an expression of some deep misgiving, some pressing feeling of insufficiency at the center. Proselytizing is more a passionate search for something not yet found than a desire to bestow upon the world something we already have. It is a search for a final and irrefutable demonstration that our absolute truth is indeed the one and only truth. The proselytizing fanatic strengthens his own faith by converting others. Pg. 110

8 Responses to “Book Review: The True Believer – Thoughts on The Nature of Mass Movements”