“We all remember the parts of the past that help us connect with the future.” 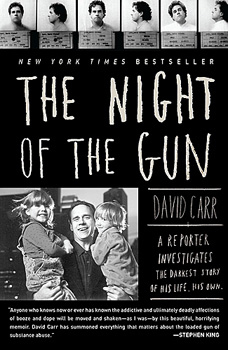 I picked up a copy of David Carr’s Night of The Gun in 2009 because of the unusual offer the book made to readers. It wasn’t just a memoir. It was a memoir written with a daring interest in the truth. The book details the harrowing years of his addiction, and the horrors he created for his wife, friends and young children, but it was his pursuit of challenging his own memories that fascinated me. Carr interviewed his friends and family about their experiences with him in the past to develop the book and writes about them. Asking these questions and honoring the answers is uncommon in memoirs, and in most lives.

Memoirs are a curious form of writing. Unlike autobiographies where there is the suggestion of completeness, and novels where the assumption is invention, memoirs hover in the middle ground. They are often focused on just one element or time in a person’s life, and shift in style from essays to novelistic accounts of important events. Memoirists are granted wide latitudes – it’s assumed they’re telling their story, in their way, with subjective truths taking more of the foreground than objective ones. Carr put a heavy stake in the ground in asserting for the reader what kind of memoir he was writing and what kind of truth he was after.

Night of the Gun is a tough book. There are many horrible things that happen and Carr, the author, is their protagonist. You can’t read it without asking yourself how honest you are about who you are, and the bad things you’ve done that you rarely remember anymore. Would you be brave enough to interview your own family about your past? Ex-boyfriends or former friends? This was by far the most compelling element of the book for me. It was an inspiration for writing The Ghost of My Father, where, like Carr, I did interview my family for the project, as hard as it was to do.

I’m very sad that David Carr is gone. His book was an influence on my ideas for my own writing. While I wasn’t a regular reader of his work, I noticed the intelligence and braveness he had about the craft and it inspired me.

Many people will be interested in his book for autobiographical reasons: Who was this man? they’ll ask. But I hope if you read the book you’ll tend to the braveness of craft he demonstrates, as the pursuit of honesty with ourselves and each other is perhaps the great challenge of the human race.

3 Responses to “The Night of The Gun, Review”