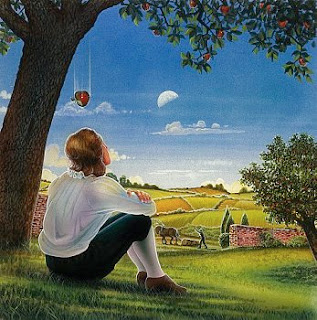 Recently The Royal Society put their copy of the best evidence in the world about the fabled story of Newton watching an apple fall up on the web. NPR picked up the story here.

Most Americans know the violent version of the story, where Newton actually gets hit on the head by the apple. This bit was 100% definitely a fabrication, added to the story more than 100 years after Newton’s death (likely by Isaac Disraeli).

But what about the actual event? Was Newton’s entire theory for gravity inspired by an apple? Mostly no. It’s a subject I researched heavily for chapter 1 of The Myths of Innovation. Newton was not famous for discovering gravity, but for writing the Principa Mathmatica, which explained, mathematically, how universal gravity functioned. It took him many years to write this book, despite the legend of his life centering on a singular moment of insight.

The primary evidence for the “apple event” is in a book The Royal Society posted titled Memoirs of Isaac Newton, written by his friend William Stukeley. But it’s a dubious record of facts:

In James Glieck’s excellent biography, Isaac Newton, he strongly suggests Newton offered the story as an metaphoric anecdote, as way to express his curiosity about the world, rather than as a literal tale about specific singular moment that redefined his view of things.

Now my point is not to say epiphanies never happen. Instead it’s that they rarely eliminate the hard work and risk required to manifest the idea in the world. Even if Newton’s apple event took place as the legend described, Newton still worked for years to complete his theory on gravity. The moment did not spare him from years of effort to manifest the idea born from that moment.

Frankly I don’t trust Stukeley. He was apparently a good friend of Newton’s. Just as I wouldn’t trust a biographer/friend interviewing someone famous late in their life, who somehow manages to tell only them a story about something that happened decades ago, that the famous person never mentioned in any of their own extensive journals and writings or interviews with other people. I can guess Stukeley wanted Newton to look good. He also wanted his book to be read (though the publishing history of the memoir is unclear). And in the spirit of those two things some exaggeration of facts and conversion of abstract anecdotes into real specific events would not be surprising.

In an article at The Independent, one of the few pieces this week to do research at all, offers this report from an expert at the Royal Society, which owns the manuscript:

“Newton cleverly honed this anecdote over time,” said Keith Moore, head of archives at the Royal Society. “The story was certainly true, but let’s say it got better with the telling.” The story of the apple fit the idea of an Earth-shaped object being attracted to the Earth. It also had a resonance with the Biblical account of the tree of knowledge [only the word fruit is used in Genesis, but Western imagery has made the apple icon in the tale], and Newton was known to have extreme religious views, Mr Moore said.

I’m surprised that in the history of science so few people have raised any questions at all. I’d love to see the web help me round out the facts, find experts and other familiar with the sources. Spread the word.