Here’s the Q&A from my Myths day podcast about the new edition of The Myths of Innovation.

Apologies for the delay in getting this posted. You see, Bono asked me to call Jon Stewart to let him know Oprah misses him (this is a bad inside joke in reference to a bad joke I made during the webcast).

Here’s all the questions posted in the chat room – with my answers. Other questions welcome – leave in comments:

Sure. But that’s just more vocabulary. What is an idea? When you’re dead, is an idea you had in your mind more important than an idea manifested somehow in the world?

You can spend weeks debating which vocabulary is best for thinking about creativity – it is fun to a point. But then you realize you haven’t done any real work towards solving any real problem. I’m happy to yield to other people’s vocabulary if it gets everyone to actually make or design a prototype for something sooner. Most people have an idea for a book / movie / company / product / thing, but never manifest in the world in any way. The hard part is rarely the idea. Or what vocabulary they’re using. The problem is asses in chairs, or at whiteboards, or in code, or in a lab, actually making something.

Venus Picart : I heard during an MIT conference that innovation is not innovative unless it finds a market.  But nowadays, that is heavily dependent on funding, aka VC’s.  the purse strings are controlled by not so innovative people.  Can you comment briefly on that?

Finding a market is a fickle thing. Most major innovations were around for awhile, but it took years to find a market. Fax machines, copying machines, cell phones, digital music players – the list is long. Despite what people at conferences say, you can not predict nor control markets. To be an entrepreneur means you are willing to take risks, in hopes that if things pan out you will benefit from them. But even with a great idea, and a great product, and great timing, most new ideas and companies fail. At least at first.

That said, there is always room for the self-funded entrepreneur. You can find them in film, in books, in every industry. They make up for their lack of resources with cunning, daring and unencumbered brilliance (No committees, no approval requests, no gates). 37 signals is as well known for not taking VC funding, as they are for their products. The web does democratize information – PR has changed. The barriers to entry are lower than ever in history for many kinds of ideas.

You might have to make your idea smaller, or pick a different market, but there is and will always be ways to be successful funding your own ideas.  Taking VC or investment gives away the most precious thing you have: your own control over your own ideas.  What good is a $20 million budget if you can’t use it in the way that best serves your vision? You’d be better off with $500 and downsize to a studio apartment, if you can keep your independence of thought.

David Cox: Have you read Bruce Sterling’s Shaping Things? What did you think of what it was arguing for?

Nope. But I hung out with him in a bar once. He’s a very smart and entertaining guy.

Ray Luong: do you see video game design as a vanguard to learning about innovation? a lot of game teams seem to exhibit many of those traits you talked about today.

The problem with major video games is they are obsessed with the movie industry. They have modeled many of the processes and strategies after movies (e.g. game studios => movie studios). They aim so much of their effort at trying to be like film, which results often in beautiful games that are awful experiences to play. They also suffer from aiming at 15-21 year old men, or people who like to escape into realities designed for 15-21 year old men, and that’s limiting in various ways.

Games like Braid, Limbo, Portal, or Shadows of the Colossus, that take big risks on gameplay are definitely good stories for how to develop different ideas. But they’re mostly from the independents – not from the majors, who mostly make the same kinds of first person shooters and roll-playing games they have for years.

Scott Clamp: Q: Do innovative people have a more diverse social network (cross-pollination of ideas) or do they have a loner mentality?

Many breakthroughs occur when someone takes an idea from one domain or industry, an idea that is well accepted there, and brings it into a different domain that is new to the same idea. The more diverse your social network, or the kinds of books you read or conferences you go to, the more opportunity you have to find ideas of this nature.  The number of famous loners is small – even Newton, who was as reclusive as they come, studied in university for years and had colleagues and supporters who helped him develop his work – certainly in his early years.

Tim Ake: Q: I just purchased the book, but it says that it is v.1 – will we get the updated version?

Hmmm. The paperback edition says First printing: August 2010, and the cover has black and red text on grey. Not sure where any of my books say v1. If you managed to buy a copy of the 2007 edition, sorry but there’s not much I can do for you.

Eric Wayte: Q:  What’s your take on Oracle’s strategy of innovation through acquisition?

Most successful companies, certainly tech companies, use their financial advantage by acquiring other companies. It rarely works in a way that benefits consumers – but it does benefit companies, sometimes. If nothing else, taking a potential competitor off the market means they won’t hurt you, and won’t ever be available for your competitor to buy. Sometimes acquisitions are purely about talent – they want the people, not the product (although this almost never works out as the people leave once they max out on their signing bonus).

In short, few acquisitions work out. There are too many variables and culture changes required (Microsoft did actually have a few good ones: PowerPoint, Frontpage, Hotmail). But most don’t work out well. But strategy wise, if you have a big resource advantage, it’s a move your enemies can’t match: it can intimidate competitors, draw media attention, and make people look more carefully at what else you’re doing.

Eva Springer: Q: Why don’t you talk about play?

I only had about 40 minutes! Hard to talk about everything you know.

John Walker: Q: How do copyright laws complicate your notion that new ideas are combinations of old ideas?

The history of copyright makes clear that the intention was to protect intellectual property for a limited time – to reward them for their efforts, but to eventually release copyrights into the public domain. The problem isn’t the idea of copyright – but the changes we’ve made to make it close to permanent (see chart): 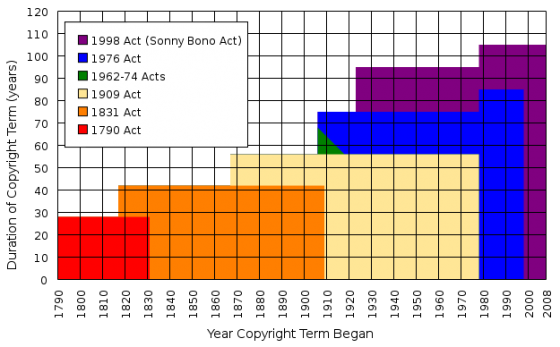 It’s clear many kinds of ideas are not patentable. I have my name on a handful of software patents, and I can tell you these are far from the best ideas I developed, or worked on. For example, the idea of a browser, or a web page, or web page layouts, or a thousand kinds of things are not patentable and can be reused in dozens of ways.

Anita Kuno: Q: When you are in a situation when the team doesn’t trust each other, what percentage of teams listen to your advice?

Hard to know. Trust is tough. Relationships are tough.  Half or more of marriages in the U.S. end in divorce.  People dealing with other people is never easy. I feel that making people aware their real problem is trust, or communication, instead of obsessing about which management methodology they’re using, at least gets them looking in the right place for the causes of their misery. Fundamentally if you work with people you don’t trust, and can’t fix it, you should leave. You’ll never be happy or do good work with people you do not fundamentally trust.

Michael Gaigg: Q: Scott, many great ideas are based on existing ones – Do I or how much do one need to credit the base product/idea?

Depends. It’s very easy to credit in most mediums. Books and webpages have links. Films have credits. Albums have liner notes (well, back when there were albums). Always credit generously. Most people find it an honor to have anything they’re made mentioned at all. Simply say “inspired by Fred, Sally and Joe” if you don’t feel comfortable being too specific.

Benetou Fabien: Q: Do you think Steve G. Blank’s book the 4 steps to epiphany is an efficient way to innovate?

Haven’t read his book, however I have had people recommend it to me.  I can only say I utterly hate the title. Taken without knowledge of the contents of the book, which might be great, the title expresses an attitude in complete opposition to what the history of invention and entrepreneurship supports, and what I teach.

Q: I loved the webcast and these questions are awesome, what should I do to get more?

Well, there’s this thing called a book, and another thing called amazon. Together it means clicking here gets you 200+ pages of way better stories, thoughts, answers and more.  And free sample chapters for the book are here (PDF).

6 Responses to “Q&A from Myths webcast”