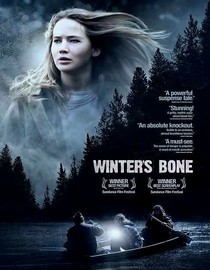 There’s something captivating about movies where you don’t know all the rules, but care to stick around to find out. This is why I like some foreign films, the ones that aren’t too weird, in that they grab your attention and mind in ways American films rarely do. They are actual artifacts of drama, instead of exercises in  “guess which cliché will happen next”.

Winter’s bone is about a young woman in Missouri who, to save her family, has to take on many hardships and risks. And at its core as a quest driven narrative it works well. But what makes the movie so engaging is how it captures the sense of a place, and a people. All of the characters feel like a part of the world being filmed (and it turns out, many of them are locals), and there’s a patience to the dialog and the plotting that lets the fears of this world, and the questionable nature of the characters, stand in relief.

It’s not an easy film to watch – but it is a fantastic and heroic film.