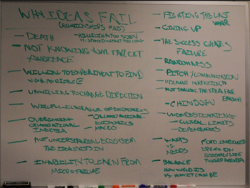 I ran a session at FOO camp on Why Great Ideas Fail. The goal was to leave the room with a list of reasons and here it is.

The crowd was tech/start-up folks and the list is shifted towards those pursuits. Fascinating how many of these are opposite pairs of each other (e.g. gave up too soon vs.stayed with same idea for too long).

Thanks to Val Aurora, I also got a list from attendees of personal reasons great ideas failed. Wide range of levels of specificity, but still interesting,

Specific failures people listed as their own:

Thanks to @jessykate for the photo of the whiteboard, from which these notes were transcribed.

22 Responses to “Why Great Ideas Fail”