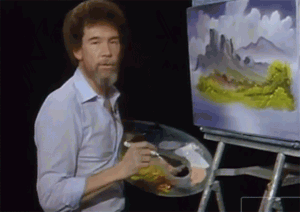 Growing up in NYC in the 1970s, with a mere 4 TV stations, any show in regular rotation on PBS was seen by millions. One show on PBS was called The Joy of Painting, staring Bob Ross, who was born 70 years ago today (and died in 1995 at 53).

I had no interest in painting or the arts, yet I’d seen his show many times. There was something about his goofy looks and quiet voice that made him easy to make fun of as a kid, and we did. But watching him now there was always an intensity about him. As silly as he seemed to me then, beneath the soft exterior he was deeply serious about the power of painting. He believed what he was doing had meaning and could be learned by others.

I see him now as an unexpected inspiration (Rick Steves is another one). Ross was the first person I’d ever seen paint. Few working artists let cameras watch them over their shoulder as they work. And although Ross’s work was often rote and predictable, he was open about his methods.  He believed in what he did enough to share what he knew and to teach as many people as he could. I don’t know many people who do or have done that.

Today as someone who writes about creativity I spend time studying how creatives do their work – until now I didn’t realize I’d seen countless examples of it as a child, thanks to Bob Ross, well before I’d even started looking.

One of his most popular sayings was ‘Beat the devil’ and here you can see him gleefully, and with just a hint of joyful madness, prep to do some work:

Later on I’d discover and be inspired by Picasso’s film, The Mystery of Picasso, where he lets the camera watch him work. Few artists have ever done anything like this:

Which would help inspire me to capture time-lapsed video of myself writing an essay: