Last night I finally made it to Hecklevision at Central Cinema in Seattle. They show bad movies and allow the audience to heckle in real time using their cell phones. Anyone in the audience can participate and it instantly appears on the screen. It’s an idea likely originated at the Alamo Drafthouse in Austin.

The movie of the night was 1995’s Johnny Mnemonic, staring Keanu Reeves. An awful movie that seems worse when you consider it’d be followed by The Matrix just 4 years later. 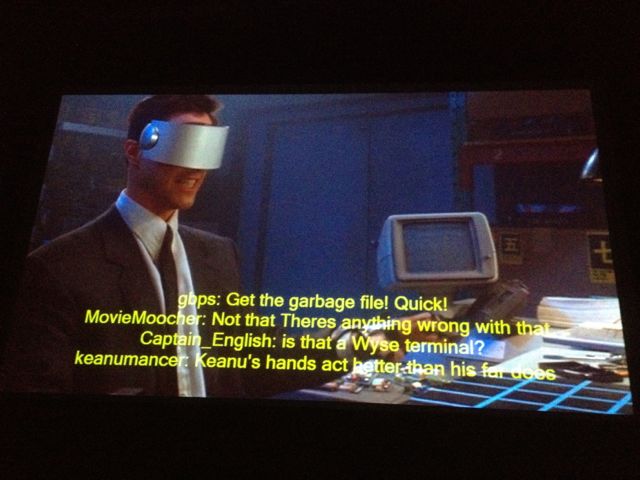 Hecklevision is a clever concept. It adds a layer of interaction on top of  unintentionally bad films. Like watching bad TV with friends, you can revel in mockery and have a great time at the film’s expense. Central Cinema serves beer and real food (as all theaters should), adding to the communal vibe of film watching.

The problem is unless you are familiar with the movie, watching in Hecklevision requires split attention. You’re trying to follow the movie so that the heckling makes sense, but also giving attention to the comments as they appear. It’s like subtitles, but worse. Unlike subtitles, the presentation of heckles isn’t synced to anything, making it tricky to follow along, especially during action sequences. A film like Star Wars or Top Gun, that many people have seen many times, might make for better Hecklevision as everyone knows what’s coming next.

The other challenge is for hecklers. It takes time to type in a sentence on a cell phone, and by the time many funny snarky things are typed in, the movie is 15 or 20 seconds further along. The joke doesn’t work as well anymore. Unlike real heckling, which is in real time, Hecklevision trails behind. I got halfway through typing some funny comments, but gave up half-way through as by that time they weren’t funny anymore. You need to be fast to participate.

The last observation is the crowd. Since real heckling isn’t allowed, the audience is quiet. Since attention is split between the movie and the comments even when someone laughs its hard to know what is being laughed at. It’s not uncomfortable, but it was disorienting. On several occasions I wanted to say something out loud in response to a heckle, realized I should type it in instead, but gave up as the spirit of the moment was gone. The overall vibe was a calm Monday night in a half-empty theater and few had been drinking. A late Friday crowd likely provides superior results.

I loved the idea and was glad I went. The entertainment value depends heavily on the mockability of the movie, and the quality of hecklers you have in a particular crowd.  YMMV. If you’re interested in user experience and interaction design it’s worth it for its novelty alone. For me, if could type on a laptop keyboard my ability to participate would have improved dramatically.

Related: My review of Willy Wonka in Smell-O-Vision.