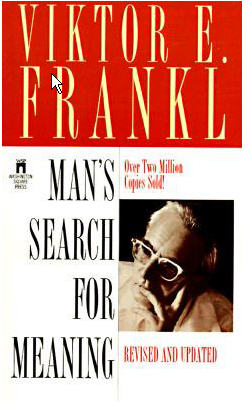 This is one of those classic books I’ve had on my shelf for over a decade, but never touched. A friend was going to read it, and as I’ve been depressed with my recent injury, it seemed a good time for me to read it too. It’s a well known classic of philosophy / Holocaust literature, written by Viktor E. Frankl, an Austrian psychotherapist who was imprisoned at Auschwitz during World War II.

Man’s Search For Meaning is a short book and a worthy read. The author’s tale is exceptionally compelling as his observations about life in hellish conditions are enhanced by his training in psychology, going beyond the awful, but familiar, horrors many of us know from popular movies and documentaries about the Holocaust.

The central theme of the book is about how anyone can choose to make meaning out of any situation, no matter how bad thing are. He uses his personal experiences and observations from the Auschwitz to support this premise. More that the list of platitudes you often find in self help books, the lessons are grounded by the first 50 pages of the book, which centers on Frankl’s first person tale of  starvation, violence, cruelty and epic loss in the German death camps.

One measure of books I use is how many passages I copy down for later. This book scored very well. Three of my favorites were:

Another was this questioning of the American worldview, where we believe we can get anything simply by aiming directly:

To the European, it is a characteristic of the American culture that, again and again, one is commanded and ordered to “be happy.” But happiness cannot be pursued; it must ensue. One must have a reason to “be happy.” Once the reason is found, however, one becomes happy automatically. As we see, a human being is not one in pursuit of happiness but rather in search of a reason to become happy, last but not least, through actualizing the potential meaning inherent and dormant in a given situation.

This need for a reason is similar in another specifically human phenomenon-laughter. If you want anyone to laugh you have to provide him with a reason, e.g., you have to tell him a joke. In no way is it possible to evoke real laughter by urging him, or having him urge himself, to laugh. Doing so would be the same as urging people posed in front of a camera to say “cheese,” only to find that in the finished photographs their faces are frozen in artificial smiles.

And it was hard not to forget this one:

Nietzsche’s words, “He who has a why to live for can bear with almost any how”

The only disappointment is the extra sections of the book vary in quality, There’s one about the theory he invented called Logotherapy, which feels like it was written as it’s own thing (which I believe it was). While  interesting, it contains a series of repetitive self-aggrandizing anecdotal tales of how this method has helped people. Even so, the entire book can be read in an hour or two, these extra sections are short, and you might enjoy them more than I did.

It’s a great book to read when you feel like a failure, feel lost, beaten or downtrodden in any way. When you are finished reading you will, at worst, see your own challenges in a different light: everything in your life could be so much worse, and even if it were, you could still find a way to find meaning.  Get the book here on amazon ( I read the kindle edition).

It seems he was a fantastic speaker. Here’s Frankl talking about the need for idealism: