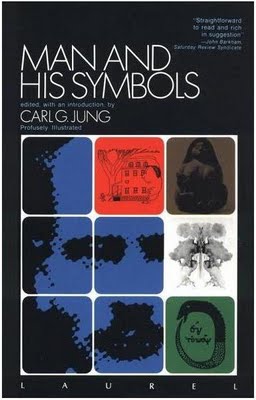 I’d heard of the work of Carl Jung by reference, and despite never reading anything he wrote I knew about archetypes and the abused false dichotomy introvert and extrovert. He’s referenced often, even by the Police in the songs and the title of their popular Synchronicity album. I like to read original sources for ideas, and have had a copy of Man and His Symbols for years. I finally read it last week.

The first disappointment is that although this is one of his more popular books, he only wrote the first chapter. The others are authored by followers and colleagues of his who explore different applications of his ideas. It was no surprise that the first chapter is the best in what can be best described as a muddled read. The chapter on symbolism in art was one of the worst for me as I have basic knowledge in art history and found this a second rate walkthrough of familiar turf.

The writing style is an odd kind of academic writing. Ideas are framed in complicated ways and hinge heavily on anonymous accounts of patient’s dreams and their interpretations. While I concede there is much to learn from dreams, and people who study them professionally are better at analyzing them than others, the hand picked cases and their analysis was rarely convincing. It felt like science by unverifiable anecdote, which is fine if the writer admits this, but no such admissions are found here.

The highlights of the book are the general observations of the disconnect in modern life between our unconscious thoughts and our rational, logical lives. The book points out how primitive societies did a better job of balancing expression of those unconscious feelings, through ritual, religion and the attention to dreams, while modern people, despite our mobile phones and streaming movies, are plagued with anxieties born from a lack of socially acceptable means to explore those energies. Dreams represent one opportunity for us to reconnect with these abandoned parts of ourselves, but there clearly are others.

I’m told Memories, Dreams, Reflections, which was Jung’s last book, is more approachable but my curiosity about his ideas has not recovered sufficiently to give him another try.

Most of us have consigned to the unconscious all the fantastic psychic associations that every object or idea possesses. The primitive, on the other hand, is still aware of these psychic properties; he endows animals, plants, or stones with powers that we find strange and unacceptable.

Because there are innumerable things beyond the range of human understanding, we constantly use symbolic terms to represent concepts that we cannot define or fully comprehend. This is one reason why all religions employ symbolic language or images. But this conscious use of symbols is only one aspect of a psychological fact of great importance: Man also produces symbols unconsciously and spontaneously, in the form of dreams.

self-control is a rare and remarkable virtue. We may think we have ourselves under control; yet a friend can easily tell us things about ourselves of which we have no knowledge.

A story told by the conscious mind has a beginning, a development, and an end, but the same is not true of a dream. Its dimensions in time and space are quite different; to understand it you must examine it from every aspect—just as you may take an unknown object in your hands and turn it over and over until you are familiar with every detail of its shape.

It is easy to understand why dreamers tend to ignore and even deny the message of their dreams. Consciousness naturally resists anything unconscious and unknown

6 Responses to “Book Review: Jung’s Man and His Symbols”