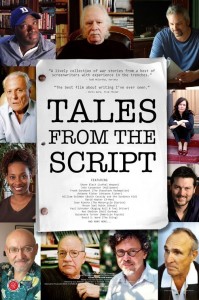 Screenwriting is hard, but what’s harder is selling a screenplay and getting a film made. The best documentary I’ve seen about the business of screenwriting is Tales From The Script, currently streaming on Netflix.

The movie is a series of interviews of the screenwriters behind many famous films of the last decade:

They each tell brutally honest stories of how they got started, what meeting with film executives is like, the surprising trajectory of their careers, and more. Plenty of lessons for writers of all kinds.

In many ways the film is an endorsement for the DIY movement, as I couldn’t help thing all throughout the film “Why would I bother with the system when I could just do the whole thing myself?”