It’s rare that companies have books written about them. Most aren’t interested and those that are must find a journalist willing to put in the  time required, which is often a year or more. It’s even rarer for the writer of a book about a company to get invited back to that company to talk about it (how very meta, but you all know I love meta).

So when I was invited to come to Automattic’s big meetup last week at their new HQ in San Francisco, I was thrilled. Although I worried about what their response would be to The Year Without Pants, I knew whatever happened would be fascinating. I planned to talk for 20 minutes about the making of the book, focusing on things employees would want to know even if they didn’t like the book itself, and then do Q&A. 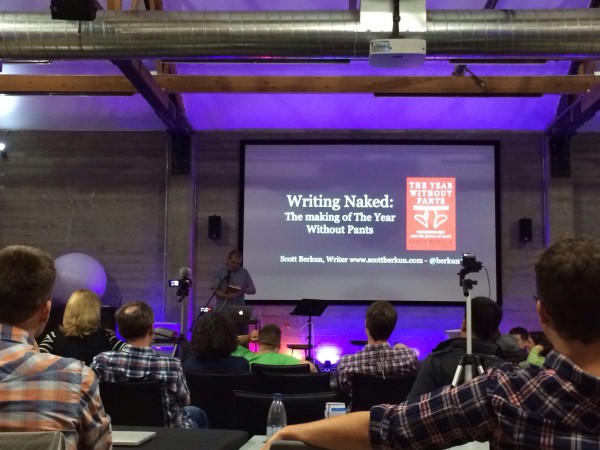 The company is now 200 people, twice the size from when I left. Nearly 70 of the employees were so new that this was their first company meeting and for them the book is the backstory of the company, a very different perspective compared to how folks at the company while I was there see the book. And I learned of other new updates the book’s “where are they now” chapter will need.

The talk went well, at least for me. I shared the movie trailer for the book, how the title and cover were chosen, as well as the backstory on how the project started. I also talked about the writing process and how many unusual challenges there were (imagining writing about your boss and coworkers). After a half hour of Q&A we retreated to the bar and, to my pleasant surprise, partying began. Someone generously (or cruelly) provisioned a bottle of Ouzo, a reference to a story from the book, and Team Social and friends celebrated long into the night.

For some of my former coworkers that I respected the most, the book was a fine, but predictable, read. For them, unlike the rest of the readers on the planet, working without email, from anywhere in the world, with little management and high autonomy, on the 8th most popular website on the planet is normal. It’s just a different reading experience when you were there, or nearby, than it is for everyone else.

Someone asked all the employees to sign the book which was amazing to see. I never expected something like that to happen. 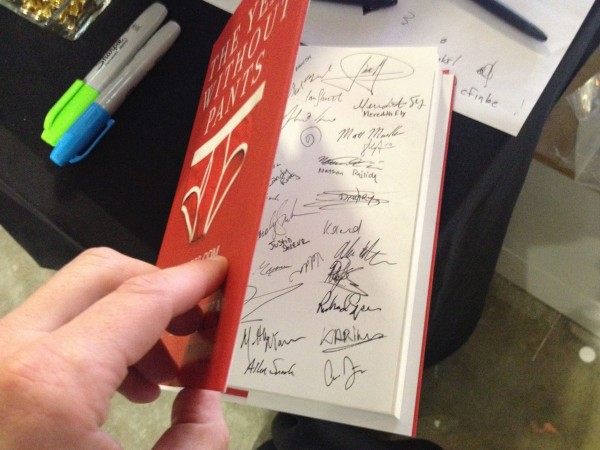 Some current and former employees had already read the book and posted about it, and I hope more of them do. Even for folks who don’t like the The Year Without Pants I’m pleased if it leads them to share perspectives, stories and opinions related to or inspired by the stories in the book:

No matter how well the book sells or doesn’t it has been an amazing and fascinating experience as a writer to write a book like this one. Thanks to Matt Mullenweg and Toni Schneider for making the project possible, and for everyone on Team Social, and supporters at Automattic, for helping the project come together so well.