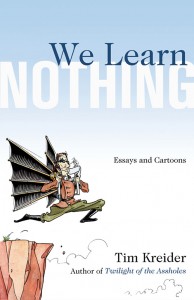 I love books comprised of essays as they free writers to go in a wide range of directions and styles, unhinged from the burden of a single narrative theme. When I heard Nancy Pearl mention it offhand in her list of the year’s best books, I picked it up (its actually the first book I’ve purchased because of Pearl – I don’t listen to her regularly, and it just happened to be the first essay collection I’ve heard her mention).

The book We Learn Nothing, by cartoonist and essayist Tim Krieder, has some of the sharpest, most insightful writing about people, life and politics I’ve read in some time. I’m not familiar with his cartoons (the book explains he was a liberal critic of the G.W. Bush administration), but I did very much enjoy this book.

Many of the essays explore questions about life through the filter of his own, using his friends, his career, and his family as the landscape for asking and answering questions we all have. His writing is sharp, intellectually provocative, and at times funny, even charming. The format of the book lends itself to a certain egoism as he is a central character in many of the essays, and many of the cartoons (the book is mostly essays, with the occasional series of drawings).

On our deepest secrets and our friends:

Each of us has a Soul Toupee. The Soul Toupee is that thing about ourselves we are most deeply embarrassed by and like to think we have cunningly concealed from the world, but which is, in fact, pitifully obvious to everybody who knows us. Contemplating one’s own Soul Toupee is not an exercise for the fainthearted. Most of the time other people don’t even get why our Soul Toupee is any big deal or a cause of such evident deep shame to us but they can tell that it is because of our inept, transparent efforts to cover it up, which only call more attention to it and to our self-consciousness about it, and so they gently pretend not to notice it.

Meanwhile we’re standing there with our little rigid spongelike square of hair pasted on our heads thinking: Heh—got ’em all fooled! What’s so ironic and sad about this is that the very parts of ourselves that we’re most ashamed of and eager to conceal are not only obvious to everyone but are also, quite often, the parts of us they love best.

On the addictive nature of complaints:

It seems like most of the fragments of conversation you overhear in public consist of rehearsals for or reenactments of just such speeches: shrill, injured litanies of injustice, affronts to common sense and basic human decency almost too grotesque to be borne: “And she does this shit all the time! I’ve just had it!” You don’t even have to bother eavesdropping; just listen for that unmistakable high, whining tone of incredulous aggrievement. It sounds like we’re all telling ourselves the same story over and over: How They Tried to Fuck Me Over, sometimes with the happy denouement: But I Showed Them!

So many letters to the editor and comments on the Internet have this same tone of thrilled vindication: these are people who have been vigilantly on the lookout for something to be offended by, and found it. We tend to make up these stories in the same circumstances in which people come up with conspiracy theories: ignorance and powerlessness. And they share the same flawed premise as most conspiracy theories: that the world is way more well planned and organized than it really is. They ascribe a malevolent intentionality to what is more likely simple ineptitude or neglect.

Most people are just too self-absorbed, well-meaning, and lazy to bother orchestrating Machiavellian plans to slight or insult us. It’s more often a boring, complicated story of wrong assumptions, miscommunication, bad administration, and cover-ups—people trying, and mostly failing, to do the right thing, hurting each other not because that’s their intention but because it’s impossible to avoid. Obviously, some part of us loves feeling 1) right and 2) wronged.

But outrage is like a lot of other things that feel good but, over time, devour us from the inside out. Except it’s even more insidious than most vices because we don’t even consciously acknowledge that it’s a pleasure. We prefer to think of it as a disagreeable but fundamentally healthy reaction to negative stimuli, like pain or nausea, rather than admit that it’s a shameful kick we eagerly indulge again and again

On the sad commonalities of political parties:

The truth is, there are not two kinds of people. There’s only one: the kind that loves to divide up into gangs who hate each other’s guts. Both conservatives and liberals agree among themselves, on their respective message boards, in uncannily identical language, that their opponents lack any self-awareness or empathy, the ability to see the other side of an argument or to laugh at themselves. Which would seem to suggest that they’re both correct.

It was one of the best written books in terms of insight and style I’ve read in some time. Get the book here: We Learn Nothing.

One Response to “We Learn Nothing: Book Review”