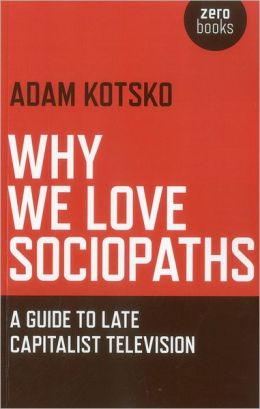 The other day I saw some high school students in a coffeeshop, and on the table was a book titled Why We Love Sociopaths. I laughed when I saw it, thinking it was an excellent book title. Then I looked it up on kindle and read the whole thing that night. At 100 pages it covers a wide range of ideas, questions and criticisms of modern television, a second cousin to Postman’s classic Amusing Ourselves to Death.

While I’m a fan of the high quality of television we’ve seen in the last decade, perhaps the highest of all time, I’m often bothered by how horrible the lead characters are as people. Certainly Shakespeare had some lead characters who were cruel or rotten and it’s not a new structure for drama. But if you run through The Sopranos, The Simpsons, The Wire, Mad Men and even South Park, you find consistent reprehensible behavior among central characters, sometimes played for comedy but often seriously.

Kotsko, a professor of humanities at Shimer college, improved my thinking( and I interviewed him about his book here). He takes many popular shows and breaks them down, exposing, through a conversational and refreshingly non-academic style, deeper questions and theories as to why these characters are popular to modern America.

I didn’t agree with all of his analysis, but that’s part of the fun. What do I believe? His take was consistently interesting enough to provoke me into deeper thought, a compliment for any book.

If you’ve never seen The Wire, House, The Simpsons, Dexter, Breaking Bad or the shows I’ve mentioned above enough to know the main characters and themes, I’d pass on this book. His analysis lands well if you’ve seen the shows, but for shows I didn’t know it was harder to follow.

Here are some good quotes from the book.

On evil sociopathic characters being a form of wish fulfillment of escape from morals:

The sociopath is an individual who transcends the social, who is not bound by it in any gut-level way and who can therefore use it purely as a tool… If only I didn’t give a fuck about anyone or anything, we think—then I would be powerful and free.

Many of the adult games that Augustine was so skeptical of remain with us today: the quest for wealth or fame, or public debates and trials won by rhetoric and technicalities rather than truth and justice. Since his time, however, at least one new adult game has emerged—the reality TV show.

The centrality of exclusion to the model can be seen in the fact that even apparently skill-based shows, such as America’s Next Top Model or Hell’s Kitchen, with outside judges determining the winner rather than a vote of one’s peers, typically rely on the slow work of “voting people off the island” rather than any kind of positive score-keeping.

What kind of man’s first thought, in the split second after witnessing a horrific death, is not to panic, not to head for cover, but to consider how he can take advantage of this situation to raise his social standing?

This mercenary approach to human identity is a necessary correlate to his ability to buy his own pitch, showing the thorough inner consistency of his worldview: everyone can be manipulated by the same emotional triggers, including me, and everyone is interchangeable, even me.

I read the whole book in one sitting. If you’re a curious fan of these shows, you’ll enjoy the book.

3 Responses to “Why We Love Sociopaths: Book Review”