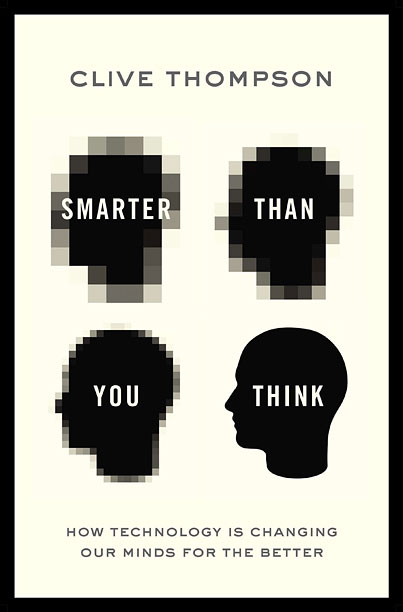 It’s wise to read books with points of view you don’t share. It’s the only way you get exposed to ideas with the power to change your mind. For a long time I’ve been a techno-neutralist. I’m not convinced technology is good or bad, it depends. I know from history how many unintended consequences our inventions have, consequences impossible to predict or prevent.

I read Smarter Than You Think: How Technology is Changing Our Minds For The Better with many doubts in mind. I certainly didn’t buy the premise as stated, but I would give it a run and see where it went. Clive Thompson writes well and thoughtfully in this book. He chose interesting stories to cover. Many of them were new to me and the way he framed them was interesting. He raised good questions I was glad to consider. I took a good number notes which is a strong indicator for me on how engaged I am in reading.

Where I struggled was with the false dichotomy of seeing technology as either good or bad. Too much depends on who you are and what your station in life is. If a new technology takes away your profession (and your home), you feel quite differently than the person whose life is made more convenient by that change. And on the scale of humanity, we’ve been poor at predicting where technological bets lead us. Gas powered automobiles seemed great news in 1945, less so in 2014. DDT was sprayed on people for years, until we learned its dangerous effects if misused. This is why highly polarized books on both sides are often underwhelming. Technology helps and hurts us at the same time, depending on the particulars of what happens and how we choose to use them. Cars bring pollution, phones bring distraction, etc. Technology always has two sides, and you are on one or the other, or a simultaneous combination of both, depending on your circumstances.

Where I struggled with the book was, as expected, the underlying premise. I was never convinced his stories supported it. Most of the stories are about very smart people who are perhaps made smarter by using a technology. These are exceptional people. Gordon Bell’s MyLifeBits project, where he has recorded all audio, video, and images of his life in a searchable database, is one story. Bell is no ordinary man, currently a research emeretus at Microsoft and a winner of the National Medal of Technology. Google Glass is also examined in the story of Thad Starner, but he’s exceptional too, as he’s the director of the Contextual Computing Group at Georgia Tech. Their minds were pretty damn sharp to begin with, challenging the question at the heart of the book: can a technology make anyone smarter who isn’t already smart? Thompson doesn’t say.

The book also avoids defining intelligence or what smart means, which was fine as the book was entertaining without digressions into definitions. But to seriously answer the central premise we need a definition to work. I prefer Gardner’s 9 part definition:

With a list like this we have a tool for examining what technologies do for intelligence. Without this list, we tend to bias towards the kinds of intelligence computers are good at as suggested by the cover design (recalling data, storing data) and discounting the ones technology is bad at (interpersonal, naturalistic, intrapersonal, existential). Thompson makes excellent points about kinds of intelligence where computers do wonderful things to help us. But he discounts the importance of the many kinds of intelligence that technology doesn’t help with at all. Things like picking spouses, choosing careers, finding fulfillment, being a good friend and deciding what best to do with our time on earth. Some of this loosely fits into Emotional Intelligence or into Gardner’s list of types of intelligence. A fun follow up to Smarter Than You Think could be to explore, for each type, how technology helps or doesn’t.

My biggest questions run towards the distinction between smarts and wisdom, and the book avoids going down that path. This was fine, but it was also my point of departure. The most important problems we have as a species aren’t problems of intelligence: they’re problems of wisdom, self-awareness, collaboration, and compassion, all things generally discounted since they’re harder to measure and harder to sell technology to solve (See Software Is Not Epic). Productivity is always the promised land in most kinds of tech-centric marketing – which is telling, as productivity is a very corporate, logical view of life. “I was productive today” – but what did you produce? Does what you did have meaning? Were you productive in a way that made your life, or life for other people, better? Did it connect you to other people you care about? And the list of deeper desires technology can’t directly contribute to or directly help us answer goes on.

4 Responses to “Book Review: Smarter Than You Think”