How would you explain the events of this year to someone from the year 2050 who time traveled to visit us? Many adjectives come quickly to mind: turmoil, danger, violence, drama, unrest, uncertainty. But if you think deeper about trying to explain what it all means, you’d realize this challenge is impossible. We couldn’t accurately tell someone from the future about the meaning of the present because we can’t understand the present yet: we don’t know what happens next! We don’t have the context to make sense of these events. If we were alive in 1776, 1914, 1968 or 2001 we’d have a similiar problem. We can describe the significance of those years now only because we know what happens after.

It must be said that we are a stubborn and frustrating species. Too often we wait for terrible things to happen before we’re willing to change our minds, or change anything at all. It’s not a rule, as history doesn’t depend on rules, but unrest and disorder are sometimes necessary to wake us up and motivate us to grow. And to remind us we share our fates with each other. In the end, the best we could tell our friend from 2050 is “something is happening!” We truly are living in an interesting time.

Contrary to the title of this essay, I don’t think the world is insane. Instead it’s more that we’re designed to live at the scale of tribes, not cities and nations (See Freud’s Civilization and It’s Discontents, where he suggests we traded sanity away to get more security and stability). It’s not the world’s fault, in a sense, but our own.

When I get past my own emotions and rantings,  I conclude three things about this year so far:

My advice is simple. We are emotional creatures, so find a healthy way to vent the negative energy that you feel. Go to the gym, or for a hike, and let your feelings out through exercise, which we all know we need more of. Scream at the sky and challenge the wind. But don’t target your rage at people, certainly not at strangers: the golden rule is a good guide here.

Another safe place to express yourself is a private journal, where any idea on your mind can be expressed safely and without judgment (Social media isn’t quite the same, because you are expressing yourself with the knowledge that someone is observing you). Or talk to friends who care about how you feel (and if you don’t have friends who care about your feelings, your real problem might be you need to find better friends).

But then, once you’ve expressed those emotions… slow down. Be curious. Seek thoughtful points of view that differ from your own: it’s the only way to provoke your own thinking to improve (instead of just responding and sharpening your preconceptions). Talking to people who agree with you on everything will teach you nothing.

I’ve read so much these last few months seeking answers. I don’t look to the news for meaning, because that’s not what it’s good for: instead, I try to read deeper. Here are five essays, with varying views, that helped me to feel I understand what’s going on (or clarifying what I don’t understand). I don’t necessarily endorse their positions but to my point above, they help in the pursuit of understanding: 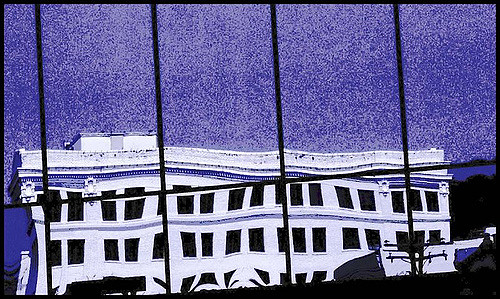 19 Responses to “Staying Sane In An Insane World ”