Some books are referenced so often that eventually you just have to go and read them, just so you can challenge people who use the book as leverage in an argument. Thoreau’s Walden was on that list, and I read it recently. Here’s my review.

It’s a curious book. It’s well known in our environmentally aware age, to be about a person who spent years living in the woods, in harmony with nature. But that’s not quite the reality of the text. Early in the book Thoreau makes clear his spot in the Walden woods, donated by a friend (Emerson), is just a few miles from town. He was not a hard core hermit or back to nature zealot, as one might assume. His ambitions were more philosophical than tied to a specific set of rules for what nature is, or how often he could talk to people or have them over for dinner. It was an inquiry, a thought experiment, and arguably an American pioneer in self-discovery and taking responsibility for learning how to live. This idea is popular today, perhaps in slicker form, in books where people spend a year following the bible or traveling by bicycle to see what happens.

I was surprised by the three distinct themes I found in the book.

One is an attempt to provide a do it yourself guide. There are several lists of things purchased with prices and sources. Thoreau is thrifty and proud. He refers to how inexpensive his life is often, and there are long stretches where he describes, on a line item basis, how much it cost to build, supply and maintain his house. It seems he had some interest in providing a how to manual of sorts, but he gets lost in his ideas. Kind of like a lonely shop clerk who keeps telling personal stories instead of getting you the ham sandwich, sitting in front of him on the counter, you came into the store for. And the details don’t age well as a practical guide as the prices for nails have gone up, and home depot puts a new spin on what it means to do it yourself. There are frequent journal style mentions of hunts, food procured from his garden, and other daily facts of his existence.

The second theme is transcendent prose. This was what I hoped for. He was a student of Emerson and it shows, with page long riffs on the strange nature of man, the potential for greatness, the limits of our cities and times, and on they go. Some of these totally rock:

There are a thousand hacking at the branches of evil to one who is striking at the root.

The mass of men lead lives of quiet desperation. What is called resignation is confirmed desperation. From the desperate city you go into the desperate country, and have to console yourself with the bravery of minks and muskrats. A stereotyped but unconscious despair is concealed even under what are called the games and amusements of mankind. There is no play in them, for this comes after work. But it is a characteristic of wisdom not to do desperate things.

As for the pyramids, there is nothing to wonder at in them as much as the fact that so many men could be found degraded enough to spend their lives constructing a tomb for some ambitious booby, whom it would have been wiser and manlier to have drowned in the Nile and then given his body to the dogs.

I went to the woods because I wished to live deliberately, to front only the essential facts of life, and see if I could not learn what it had to teach, and not, when I came to die, discover that I had not lived. I did not wish to live what was not life, living is so dear; nor did I wish to practice resignation, unless it was quite necessary. I wanted to live deep and suck out all the marrow of life, to live so sturdily and Spartan-like as to put to rout all that was not life, to cut a broad swath and shave close, to drive life into a corner, and reduce it to its lowest terms.

These are moving, potent, memorable words. If Thoreau achieved his goal of transcending normal existence through a return to nature, and sharing that experience with the reader, it comes through in these passages.

But the third theme of the book is thick, meandering, writing. He runs with the same rambling narrative for pages at a time, beating his own point into the ground or losing it altogether. Anne Dillard’s Pilgrim at Tinker Creek captures the experience of being alone in the woods with a completeness well beyond Thoreau’s, simply because she provides a consistent, reliable and intensely fascinating narrative. Thoreau seems like the kind of fellow who spent too much time on his own, and his wandering mind, unaware of the confusion he creates in the minds of others, rambles around on its own selfish whims. He was a true recluse and I think it shows. Emerson, though long-winded, keeps his points in straight lines. Thoreau writes like strings of thread, thrilling when they lead somewhere interesting, but often they just get tangled up so tightly you wish he’d take more frequent care to tie them up into neat, memorable bows.

For a short book it is not tightly written and although it has great themes, I find it hard to call it a great read. And Emerson, for all his own verbosity, should have suggested more edits in Thoreau’s work than it seems he did (I understand Emerson played a key role in getting the book published at all, but I can’t find the reference). Perhaps I came to Walden too late, having read many books clearly influenced by Thoreau’s work. And although I respect the fact the book was written more than a hundred years before I was born, I can read Emerson’s collected essays with fewer complaints.

Check it out for yourself: Walden, by Thoreau. This is an online, and annotated edition.

I tend to avoid annotated editions on first reads, so here’s the edition I used: Walden, by Thoreau (amazon), which includes his famous essay on Civil Disobedience that inspired Gandhi and MLK. 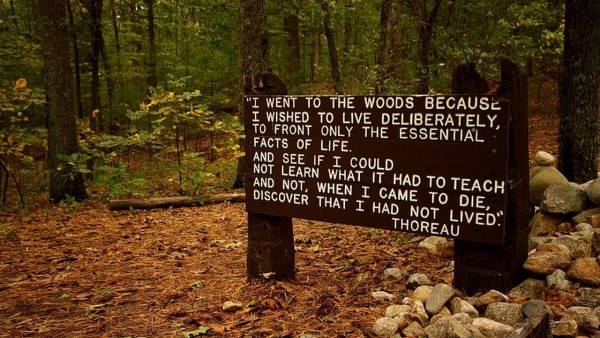