One perk of an independent life – I’m more free than most to travel the world and see amazing things.

I was in Brussels to give a lecture at Namahn, a wonderful design consulting firm, and Joannes, the company founder, was kind enough to take me to Rene Magritte’s house, which is now a small museum. He’s one of my favorite artists of all time – to see where he worked was a very special thing for me.

One of his most famous paintings is The Treachery of Images (La trahison des images). You may have seen it before:

The text in the painting reads “This is not a pipe”.

Walking around the house he lived in, many of the objects that appear in his paintings can be found, including the pipe: 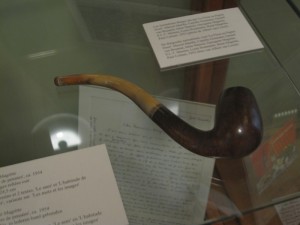 I also saw his bowler hat, the fireplaces and stairs that appeared in many of his paintings.

Sadly I just missed the opening in Belgium of the Rene Magritte museum, which will be the largest exhibition of his works anywhere in the world. It opens June 2, 2009.

You can see many of his works here – I suspect you’ve seen some of these before even if you didn’t know the name of the man who made them.