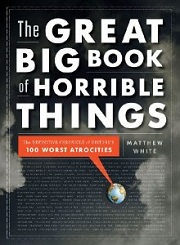 This book, The Great Big Book of Horrible Things, by Matthew White, is a masterpiece.

We think thing are rough in the world today, but wow, we are so far ahead of our history. It seems counterintuitive to read about horrible things when you think the world today is horrible, but I promise it will give you relief. Read a few chapters and you’ll put today’s bad world news in an entirely new, and optimistic context.

This is a tour de force of world history, using warfare and atrocity as the thread running through the history of civilization. He winds his way through every major conflict with insight, wit, theory and more, avoiding all of the traps historians make of confusing the esoteric with the interesting. White manages to take the most complex events of human history and deftly explain the causes, sequences and affects, giving readers memorable insights into the history of civilization. As a non-historian I cannot vouch for the historical accuracy of everything in the book, but on the grand scale he tied together so many different parts of world history that I never understood before.

As the title suggests the anchor of these stories is warfare, from fratricide, to genocide, which should not be taken lightly. But it does make for a compelling narrative force: how do you compare the worst events in human history, and evaluate the (horrible?) people behind them?

The spine of the book are various lists about the most horrible events, the worst leaders, and the people who killed the most in history. He run through his list of the top 100 atrocities of all time, spending more or less time on each as he feels is relevant to understanding the broader history. The last 50 pages of the book list his sources and methods for the historians out there that want to follow his trail (the references are online too).

Here are some choice quotes:

“People have been killing each other ever since they came down from the trees, and I wouldn’t be surprised to find bodies stashed up in the branches as well.”

“War kills more civilians than soldiers. In fact, the army is usually the safest place to be during a war. Soldiers are protected by thousands of armed men, and they get the first choice of food and medical care. Meanwhile, even if civilians are not systematically massacred, they are usually robbed, evicted, or left to starve; however, their stories are usually left untold. Most military histories skim lightly over the massive suffering of the ordinary, unarmed civilians caught in the middle, even though theirs is the most common experience of war.”

“Civilization before the Enlightenment was rather flexible when it came to historic accuracy, and ancient historians never let the truth get in the way of a good story.”

“Why Did Rome Fall? The best way to understand the fall of Rome is to skip the first half of any book on the subject. Yes, background and long-term trends are important, but some historians go so far back looking for the cause that they make it sound like Rome was tumbling toward its inevitable fall right from the start.”

“If we categorize the entries in this list according to which religions came into conflict, we get this simplified breakdown: Christian vs. Christian: 9 Muslim vs. Christian: 3 Christian vs. Jewish: 3 Eastern vs. Christian: 3 Jewish vs. pagan: 2 Muslim vs. Chinese: 2 Muslim vs. Muslim: 2 Human sacrifice in India: 2 Human sacrifice in Mexico: 1 Ritual killing in Rome: 1 Muslim vs. Hindu: 1 Manichaean vs. Taoist: 1 We can probably go even farther and group them into four larger categories: indigenous human sacrifice (4), monotheistic religions fighting each other (17), heathens fighting monotheistic religions (8), and heathens stirring up trouble all by themselves (1). In early history, the majority of religious killings involved sacrificing people to bribe and placate the dangerous forces of the universe. Then, Judaism and its offshoots, Christianity and Islam, devised a worldview where a single all-powerful god required a strict, uncompromising belief rather than tangible offerings.”

Thanks to Rob Lefferts (of the Lefferts law) for the recommendation.