One of the most provocative chapters of The Myths of Innovation is The Myth of Epiphany.

Do you love stories about flashes of insight? Or wish you had more of them so you can be more creative? Most people do. But the reasons these stories are loved has little to do with how breakthroughs usually happen.

The surprise is if you scratch the surface of any epiphany story, you’ll find they are mostly fabrications and exaggerations. As fun and inspiring as they seem, their value fades in practice. I don’t say this to depress you: it is true that the thrill of an epiphany feels great. But if you’re serious about ideas you need to look deeper into what these stories are really about.

One of the best accountings of the mythology is from Tim Berners-Lee, describing how he invented the World Wide Web, one of the greatest inventions of the 20th century:

“Journalists have always asked me what the crucial idea was or what the singular event was that allowed the web to exist one day when it hadn’t before. They are frustrated when I tell them there was no Eureka moment. It was not like the legendary apple falling on Newton’s head to demonstrate the concept of gravity… it was a process of accretion [growth by gradual addition]”

Even Berners-Lee was a victim of the epiphany myth, as the apple falling on Newton’s head didn’t happen, and the entire story is problematic as it’s usually told

We love these stories because they support our secret wish that creativity only requires a magic moment. That it’s like a lottery where we just need to be inspired enough, or have the Muses favor us. It feels safer to believe this, but it is dangerous because of how far removed it is from reality. Do you find the excitement of a flash of insight fades quickly? All of our creative heroes experience this too.

“Inspiration is for amateurs — the rest of us just show up and get to work.” – Chuck Close

We love stories of flashes of insight because we love dramatic stories. The notion of an epiphany ties back to religious and spiritual concepts like the Muses, where forces in the universe instantly grant things to people. Even if we don’t literally believe in these forces we love the notion that creativity works through some system, and that all we need is one brilliant moment that can change everything for us.

The smarter way to think of ideas is that a flash of insight is one part of the process. You can take any epiphany story and shift it into giving you useful advice for how to follow in a successful creators footsteps.

Even the Newton apple story isn’t true in the way it’s commonly told. Newton certainly wasn’t hit on the head, and it’s unlikely that the singular moment of watching an apple fall from a tree, even if it happened, carried particular significance to a man who made daily observations and ran frequent experiments testing his ideas about the things he saw.

The lesson about creativity from Newton we should learn is his daily habits: he frequently asked questions and ran experiments, constantly trying new approaches and making prototypes to explore his ideas. But that’s not nearly as exciting a story to tell as the apple tale, so it’s rarely told.. 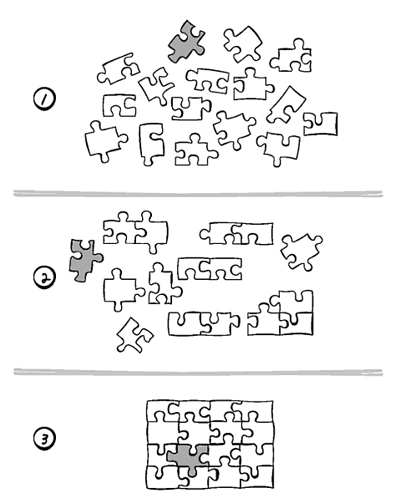 Leave a Reply to Drew Kime