[In 22 days my latest book, The Dance of the Possible: the mostly honest completely irreverent guide to creativity, launches. I’ll be counting down the days until then with the story of an interesting idea, fact or story related to the book – you can see the series here]

“Knowledge is a big subject. Ignorance is bigger. And it is more interesting.” – Stuart Firestein 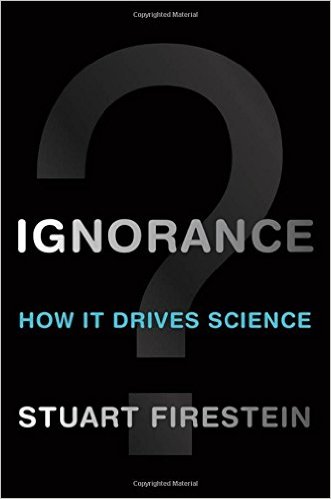 It should be no surprise that the forces involved in creative thinking can be counter-intuitive in nature. Often people use the framework of problem solving when talking about ideas, which is useful, but primarily logical. This makes the problem itself (“how can I build a better mousetrap?”) and the desire to solve the problem (“mice keep stealing all of my cheese”) provides the fuel to do the work.

But a more surprising way of thinking about ideas is that it’s ignorance, the lack of knowledge, that can also be the motivating force, or at least curiosity about that lack of knowledge. Curiosity is an interest in finding out what you don’t know and you can only be curious about something if you have ignorance. If you know everything, there is nothing to be curious about (an observation that helps explain why know-it-alls are so dull to be around. They know everything but are curious about nothing).

Science is often used as a metaphor for things we completely understand. The common saying “the art and science of…” uses the word science to represent formulas, facts and figures, things that are well understood. But how did we learn those formulas and facts? We forget there must have been a time when we were ignorant of those things, and someone, a scientist perhaps, was curious enough to try and figure them out.

In Stuart Firestein’s wonderfully compact book Ignorance: how it drives science, he explores the central role that ignorance, and curiosity, play in developing all of the knowledge that we take for granted today (He did a TED talk on this topic as well).

There are strong parallels in his book to any kind of creative work, such as projects where the goal is to do something new, solve an unsolved problem or to work on anything challenging at all. For many its a surprise to think of ignorance being central to science, much less creativity. But if science can be thought of in this way, then so can any field or profession, including the one you work in too.

Here are some favorite quotes from the book:

Questions are more relevant than answers. Questions are bigger than answers. One good question can give rise to several layers of answers, can inspire decades-long searches for solutions, can generate whole new fields of inquiry, and can prompt changes in entrenched thinking. Answers, on the other hand, often end the process.

What if we cultivated ignorance instead of fearing it, what if we controlled neglect instead of feeling guilty about it, what if we understood the power of not knowing in a world dominated by information? As the first philosopher, Socrates, said, “I know one thing, that I know nothing.”

There is no surer way to screw up an experiment than to be certain of its outcome.

Here are some examples of what have turned out to be good questions in my class: Do you think things are unknowable in your field? What? What are the current technological limits in your work? Can you see solutions? Where are you currently stuck? How do you talk about what you don’t know? What was the main thrust of your last grant proposal? What will be the main thrust of your next grant proposal? Is there something you would like to work on knowing but can’t? Because of technical limitations? Money, manpower? What was the state of ignorance in your field 10, 15, or 25 years ago, and how has that changed? Are there data from other labs that don’t agree with yours? How often do you guess? Are you often surprised? When? Do things come undone? What questions are you generating? What ignorance are you generating?

Almost everyone believes that the tongue has regional sensitivities— sweet is sensed on the tip, bitter on the back, salt and sour on the sides. Pictures of “tongue maps” continue to appear not only in popular books on taste and cooking but in medical textbooks as well. The only problem is that it’s not true. The whole thing arose from the mistranslation of a German physiology textbook by a Professor D. P. Hanig,

So some things can never be known and, get this, it doesn’t matter. We cannot know the exact value of pi. That has little practical effect on doing geometry.

Thomas Huxley once bemoaned the great tragedy of science as the slaying of a beautiful hypothesis by an ugly fact.

Faraday, by the way, had no idea what electricity might be good for and responded to a question about the possible use of electromagnetic fields with the retort, “Of what use is a newborn baby?” This phrase he apparently borrowed from Benjamin Franklin, no less, who was the first to make the analogy in his response to someone asking him what good flight would ever be after witnessing the first demonstration of hot air balloons.

wrong. Great scientists, the pioneers that we admire, are not concerned with results but with the next questions. The eminent physicist Enrico Fermi told his students that an experiment that successfully proves a hypothesis is a measurement; one that doesn’t is a discovery. A discovery, an uncovering— of new ignorance.

George Box, noted that “All models are wrong, but some are useful.”

5 Responses to “How Ignorance Drives Creativity”

Leave a Reply to Suraj Soni