[In 23 days my latest book, The Dance of the Possible: the mostly honest completely irreverent guide to creativity, launches. I’ll be counting down the days until then with the story of an interesting idea, fact or story related to the book – you can see the series here]

In 1946 Dr. Percy Spencer of Raytheon Corporation was working on radar experiments with a magnetron (a device used to produce radio waves). When he noticed the candy bar in his shirt pocket had melted, he had every reason to throw it away, except one: he felt no heat. Odds are good that other people in radar laboratories around the world experienced similar globs of chocolate and other foodstuffs in their various pockets, and did nothing about them, other than to clean up the mess and get back to work. And given that the rational, logical parts of most intelligent people’s brains would tell them to do the same, getting rid of the offending savory bits and forgetting about it as soon as possible, it’s entirely odd that Spencer chose something different. Remember, he essentially found a bit of warm trash in his pocket, and chose to spend the rest of the day playing with melted cocoa beans, ignoring the millions of dollars of super cool top secret defense equipment surrounding him in his lab.

Just imagine Spencer in that moment: standing alone in a lab, expensive lights blinking on and off all around him, his eyes staring down at two chocolaty fingers, his Hershey stained clothes and lab coat crying out for care. If you walked past him at that instant you’d think for certain he was insane: a chocolate fingered loon. But although he didn’t know it yet, this chance encounter, the moment that redlined his curiosity well past his logical mind’s ability to follow, would lead him to the invention of the microwave oven. Curious about the source of heat, he put some popcorn kernels, and then an egg, by the nearest radar tube. The pop-corn popped, and the egg exploded. He quickly found support for more experiments, and spent the next ten years developing this chance encounter into one of the most used appliances in the world.

How else will new knowledge appear to us, if not as strange, bizarre or incomprehensible experiences? We forget that the common sense we hold dear today was, years or centuries ago, discovered by a curious mind willing to ignore the common sense of their own time. Any sane person would throw away his mistakes without a second thought, but an open mind might just stop and ask “how can I explain this?” before throwing it in the trash.

The microwave would take a long slow path to reaching consumers. The first commercially available designs in 1947 weighed over 700 lbs, were over 6 feet tall, and cost $5000 (about $40k today) . In 1971 only 1% of U.S. households had them. By 1986 it would rise to nearly 25%. Shown below is the Raytheon Mark V Microwave (1963) used mostly for commercial purposes. Note the four color button UI for different time settings. 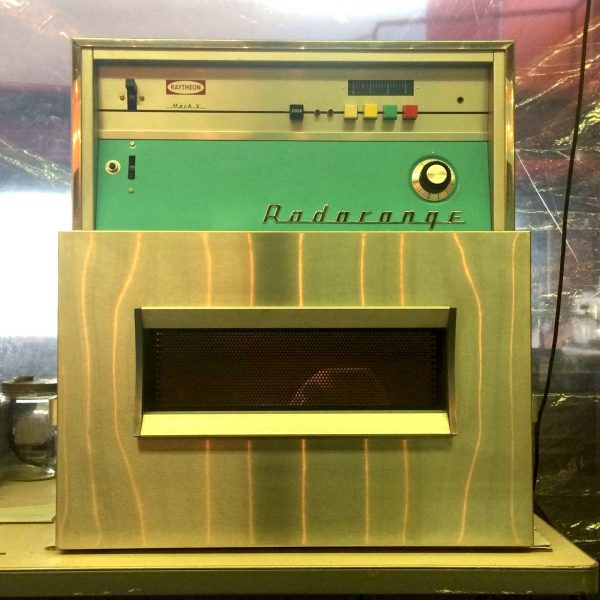 [Excerpted, and revised, from Chapter 9 of The Myths of Innovation]

4 Responses to “Inside the messy invention of the microwave oven”