[In 28 days my latest book, The Dance of the Possible: the mostly honest completely irreverent guide to creativity, launches. I’m counting down until then with a story a day  – see the series here]

When the Wright brothers landed from their famous flight at Kitty Hawk on December 17, 1903 almost no one was there: just five people including a boy from the neighborhood. This is surprising to us in the present because in the nearly 114 years since that day airplanes have become central to modern life. But at the time airplanes were mostly a curiosity. Many other inventors over the centuries had attempted, and in some cases succeeded, at different variants of assisted and even powered flight. But the world shrugged at them all. “What problem does this solve?” was an excellent and largely unanswered question for these men and their machines.

Even the Wright brothers themselves weren’t entirely sure what powered flight could achieve. They passionately believed the invention would help end wars, as the power to see enemies from above would, in their thinking, eliminate the incentive to attack at all. Given the central role airplanes have played in modern warfare for decades this notion seems terribly naive, but inventors often are. The ability to create something doesn’t come with the ability to predict the future (although often often comes with enough hubris to make the inventor believe otherwise). Regardless, they faced a more pressing problem after their famous flight. Almost no one in the U.S. was interested in their creation for any purpose at all.

The Wright brothers had to go to Europe for a time to try and to sell their ideas, and it took many months before they found their first customers. They finally negotiated a contract with the U.S. government in 1907. It was the first military contract in aviation history. It took four years to get someone to pay for their airplane design.

What can we learn:

The detailed invention story of the Wright brothers airplane is one of my favorites and among the most rewarding, as they patiently applied problem solving, research and invention approaches without any formal training. An inspiring, and well illustrated, read is How We Invented The Airplane by Orville Wright. 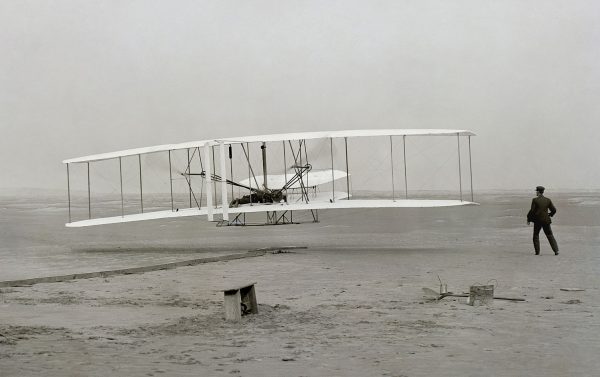