On my recent trip to Detroit, I saw many interesting things. I saw Jeff Gurney sing at the Red Ox Tavern in Utica (Not bad for a Tuesday). I stayed at the ritzy MGM Grand Detroit, a short walk from the emptiest downtown streets I’ve seen this year (Greektown and the Fox theater were fun though). I spoke at the surprisingly cool Lorenzo Cultural Center, as part of their month on American Ingenuity, where everyone is smart and friendly.

But the hands down highlight of the trip was my afternoon at the Ford Rouge factory tour. 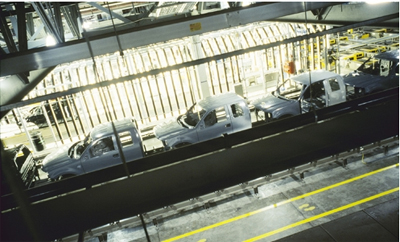 Most factory tours aren’t tours. They’re PR fabrications. For years I’d stop at the Hershey factory ‘tour’, on my regular end of semester trip between CMU and NYC. It was cute and silly, with bad animatronics and cheezy movies about how cocoa beans eventually become hershey’s kisses. Not much of a tour, but a fun break on a long trip.

The Rouge factory tour (Rouge is the name of the nearby river) is the real deal. After a few short PR-ish films (kudos for a mention of Ford’s early union battles), you walk on an observation catwalk above the Ford F-150 assembly line – it’s the real thing. And it’s self guided. No photography is allowed, and cell phones are prohibited, but I spent an easy hour watching in fascination as people and machines worked in tandem to build cars.

The observation area is a catwalk above the factory floor, and you can walk around the entire perimeter. Kiosks tell you about each of the major areas you can look down to see and how each section works.

Workers stand on moving skids, traveling with each car until their tasks are done. Then they step off, and move back up to the next car. The line moved perhaps a foot or two every second. Not that fast to my naive eyes, but given the number of tasks each worker had to perform, it was impressive none the less. And the longer I watched the more impressive this pace seemed.

Most fascinating was the design of the line itself. Hundreds of details must be sorted for each car, and communicated to dozens of workers. Huge scoreboards showed the line status, but other terminals and indicators helped each section discover and track what needed to be done for each car. Designing a system like this involves a huge set of skills: interaction design, workflow, process, economics… the amount of thinking that goes into a line like this is hard to fathom. And the work involved by each person on the line, despite the automation and technology, was intricate, careful and precise. In just a few minutes of watching anyone on the line, I was reminded of how much effort goes in to make a single car, much less 1000 or so a day. It really did make me want to go buy a Ford F-150.

All these thoughts are, I’m sure, well beyond the dreams Ford had when he considered that how butchers work with meat in automated lines, might just be useful for assembling cars. 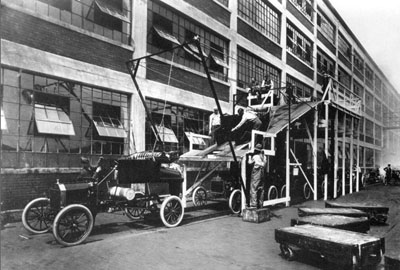 If ever you’re in the area, I highly recommend the tour. It was the most interesting hour I have spent watching things indoors in some time. Somehow watching software and new technology being made can never approximate the wonders of the construction of physical things.