On the end of a long road trip through the southeast, I spent yesterday at the WWII museum in New Orleans. I didn’t even know we had a museum for this war, and was surprised to discover it’s not in Washington D.C.  The museum is located in New Orleans in part because the Higgins boat was invented there: it’s the amphibious vehicle used for the D-Day invasion at Normandy.

The museum itself, I’m sad to say, is one of the more confusing museums I’ve ever been to, with exhibits divided over several buildings, and not ordered in any obvious fashion (like say, chronological). There is an amazing and powerful story told here, but the overall experience is disorienting and it’s easy to get lost or go the wrong way through some exhibits. The Final Mission: USS Tang experience exhibit is the worst of the bunch, an under designed and barely interactive experience “simulating” the last mission of the U.S. submarine Tang, the most honored and successful submarine of the war.

I’m glad they chose to tell this story, as it’s a heroic and tragic tale, but it’s poorly told and a film would have been far more engaging than the underwhelming simulation they provided (I had to read about the last mission online to understand what the simulation was trying to explain. The Tang sank after being hit by it’s own stray torpedo). 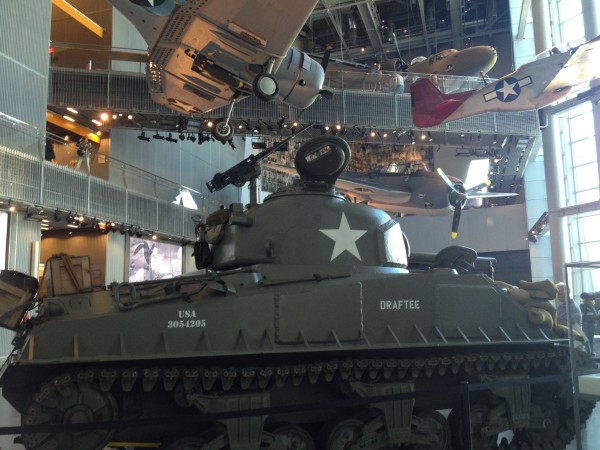 The offering with top billing is the 4D experience Beyond All Boundaries, narrated by Tom Hanks with many famous actors in voice only roles, a 20 minute summation of the entire war. It’s well done and comprehensive, establishing how the fate of the world was at stake in this war, something that has not been true for any war since (despite the endless fearmongering of every war the U.S. has entered or caused since).  The story told has an  unsurprising focus on American’s role in the war, which is certainly important and worth in many ways, but there’s very little mention of the Soviet Union’s major, and possibly larger, contribution to victory. The U.S. lost 600,000 people in WWII, the Soviet Union lost nearly 20 million. I visited the WWII museum in Kiev, Ukraine in 2009 and was fascinated by the comparisons and contrasts to U.S. tellings of the same war it provoked. 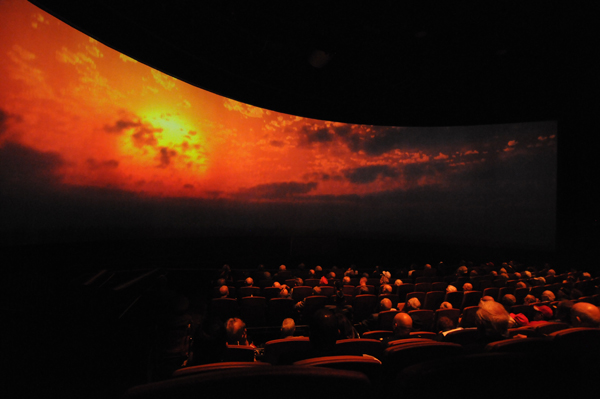 My favorite exhibit, perhaps because I learned the most new insights from it, was Manufacturing Victory. The central argument it makes is the primary reason we won, and were even able to put up a fight, in WWII was the transformation from the U.S, with only the 18th largest army in the world in 1937, into a major military production power. Without guns, tanks, boats and planes to fight, the war would have been over before it began. One of the displays in the museum showed the relative size of the armed forces of Japan, Germany and the U.S. (shown below) early in the war. We were an isolationist and peaceful country with few ambitions for world power. 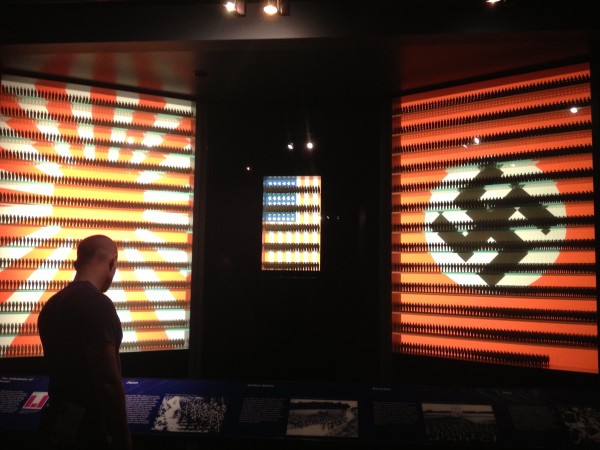 General George Marshall is the hero of the exhibit. He pushed his way into a conversation with FDR, convincing him the U.S. was woefully underprepared and needed to make radical changes to protect itself, much less win the war. His persistence led to the plans that made co-operation between government and business possible. Ford converted car plants to make warplanes, Motorola made the walkie-talkies used in WWII and dozens of other companies shifted their production from consumer goods to war goods. The exhibit details just how many people and organizations contributed. There are so many untold stories in just this one aspect of what was involved in winning the war. 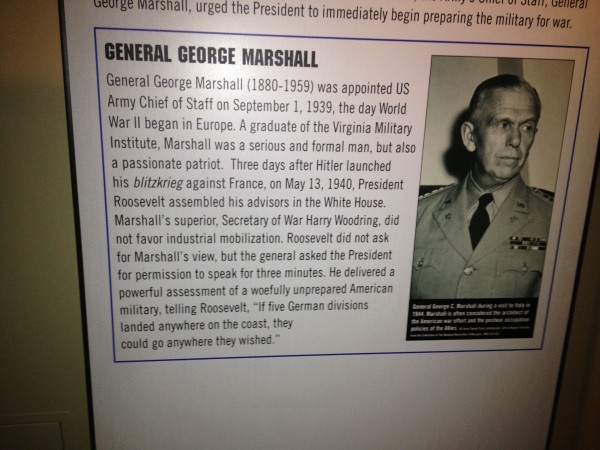 It was also made clear how every American was asked to help with the war effort. It wasn’t just the existence of the draft which gave most Americans a personal connection to the war (something we’ve lost in our wars since abolishing the draft). There was a kind of civic pride and patriotism that’s rare today about making sacrifices for the nation. Shortages of rubber and copper meant citizens were asked to donate the supplies they had, and many items, like food cans, were recycled for the war effort. Unlike being told our duty is to consume, it was made clear that every American should take pride in sacrifice for the greater good and helping with the national effort. 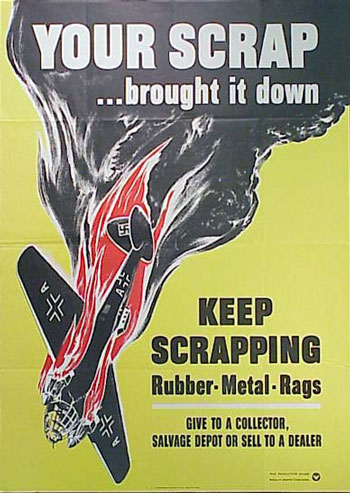 In a way the massive armada at D-Day, one of the largest every assembled in history, was the output of the collective effort of an entire nation. Britain and Canada made similar sacrifices and contributions (and of course it was England that had the strength to remain the last free country in Europe, fighting for years before America entered the war). Even during the revolutionary war American citizens were largely divided and there’s an argument to be made that WWII had more support from its citizens than any war fought before or since.

The carnage at D-Day, and during the war, is explained in graphic detailed at the museum. The prolonged end of the war was horrible on so many levels, and even more futile and pointless, than the heart of the war itself. It’s hard not to feel something deep and sad about how many people lost their lives during the war and how much pain and suffering the entire endeavor caused for everyone involved.

Over 60 million people died during WWII, nearly 2.5% of the entire population of the planet at the time. The entire idea of war seems so foolish and futile, yet we continually find ourselves stumbling backwards into more of them.

For Veterans day my thoughts are with everyone who has volunteered their time and service for a greater good. I just wish those sacrifices could be made in ways that weren’t in opposition to other nations. I hope for a day when the lessons form the past are so broadly and deeply understood, that few people ever have to die or suffer again for so little gain. I feel tremendous respect towards everyone who serves their communities, and only wish more of our sense of service was directed at civic, peaceful endeavors, a thought that weighed heavily on my mind as I left the museum.